Ravenous Hydra is an offensive item that is especially great on champions with solid sustain. Its omnivamp feature can be utilized in numerous situations, while Cleave unique gives you a bit more presence in teamfights.

In the last few patches, the item has felt rather underwhelming despite its 106.24% gold efficiency. Still, there are a few champions that can do really well with it. Ravenous Hydra seems ideal for characters who already deal heavy AOE damage and can omnivamp from several champions at the time. Unfortunately, that health steal often feels weak compared to what other items provide.

In this Ravenous Hydra Guide, we will review its stats and abilities, the most common users, and share a few interesting facts.

Ravenous Hydra is an offensive item that is optimal on melee physical damage champions but also provides some benefits when casting magic spells. It has a nice splash ability, slightly increasing teamfight presence of a champion.

Ravenous Hydra is categorized as a legendary hydra item. If you already bought this object, you can’t have any other item from the hydra category. It provides wearer 70 attack damage, 20 ability haste, 10% omnivamp, and a unique passive ability called Cleave.

The item’s Cleave works really well with omnivamp. Whenever you damage enemies with abilities and auto-attacks, you will cause 12% to 60% AD physical damage in a radius around the target. This damage varies based on proximity to the enemy. In other words, melee champions will get a full 60% when striking an opponent with their basic attack.

The splash damage will affect every enemy once, and you can trigger it every 10 seconds.

The item is mainly built on melee characters, but keep in mind that Cleave also works on ranged champions. In theory, you can build it on someone like AD Twitch, but this means you will lose a large percentage of potential damage (as you will usually attack from a distance).

As mentioned, most of these stat bonuses work well with each other. For example, the splash effect is great for omnivamp as you will restore health by attacking as many champions and minions as possible. The added physical damage on the item will also help the overall splash damage.

However, players have sometimes criticized the additional of spell haste. Given the nature of the item and that Cleave can only proc every 10 seconds, the ability haste doesn’t synergize well with the unique passive effect. Also, a lot of players argue that AD on Ravenous Hydra is not as potent as AD on some other items.

The Most Common Ravenous Hydra Users 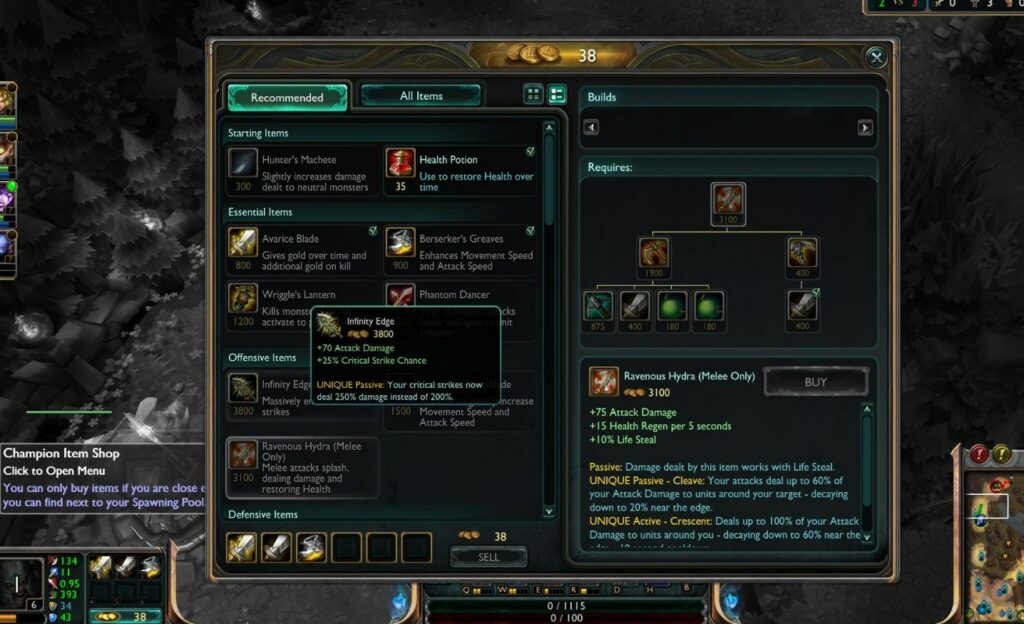 Besides these three, the item is really solid on Aatrox, Camille, Fiora, Kled, Rengar, etc. Overall, it makes sense to buy it on 21 different champions. Ravenous Hydra has an average win rate of 56.01% and an average pick rate of 14.81%.

Ravenous Hydra is ideal for sweeping several enemy champions at once. Its omnivamp makes it ideal for melee champions who focus on dishing damage on one or several enemies. In fact, you benefit more from having heavy damage-dealing abilities and less from having disable-focused spells.

Although omnivamp heals a champion whenever he deals any form of damage, the item is clearly meant for tanks, fighters, and other physical damage dealers who will be exposed to enemy attacks. While you can try going with some hybrid builds, the very fact you have an attack damage bonus on the item tells you in which direction you should build a character.

The Most Popular Builds That Include Ravenous Hydra

While the idea of omnivamp applied in an AOE sounds great, it isn’t enough to provide long-term sustain. This is why champions have to build other sources of regeneration, heal, and lifesteal to make this build worthwhile.

Ravenous Hydra has some tanking potential due to omnivamp, but it is much more geared towards offense. It doesn’t provide health, armor, or resistance, and it is more predicated on dishing damage to survive.

Here are some of the popular builds that utilize Ravenous Hydra:

As you can see, there is a lot of variation in these builds. The one thing that is common for all of them is Plated Steelcaps, a common tank item. The focus on Ravenous Hydra builds is not only to dish damage but also to sustain yourself. You would have to combine defensive, offensive, and sustain items to make it work.

Death’s Dance is the second, most-common item for Ravenous Hydra builds. Although 45 additional armor definitely helps your defense, what makes this item so intriguing are its two unique passives.

The first unique is called Ignore Pain. Whenever you take physical damage, this damage is not applied instantly but instead will leave a 3-second DOT. With a second passive called Defy, you can remove this DOT, effectively removing a part of the damage taken.

If that wasn’t enough, the champion also heals 15% of total health over two seconds. This interaction forces you to play aggressively and hope that you’ll dispose of an opponent before the enemy team kills you. Sterak’s Gage is another popular pickup. Not only does it work very well with Ravenous Hydra, but it is also nice in combination with Death’s Dance. The item gives you 400 health and 50 attack damage.

In the latest patch, Sterak’s Gage has been changed a bit. Previously, it had 2 defensive passives that made the champion really tanky. Riot has removed the first defensive passive, which provided healing over time, and has given the item additional damage on attack.

It’s second passive, called Lifeline, creates a shield on the champion whenever he drops below 30% health. That way, even you play recklessly in an attempt to get a takedown with Death’s Dance, you can fall back on Lifeline to save you in a pinch. 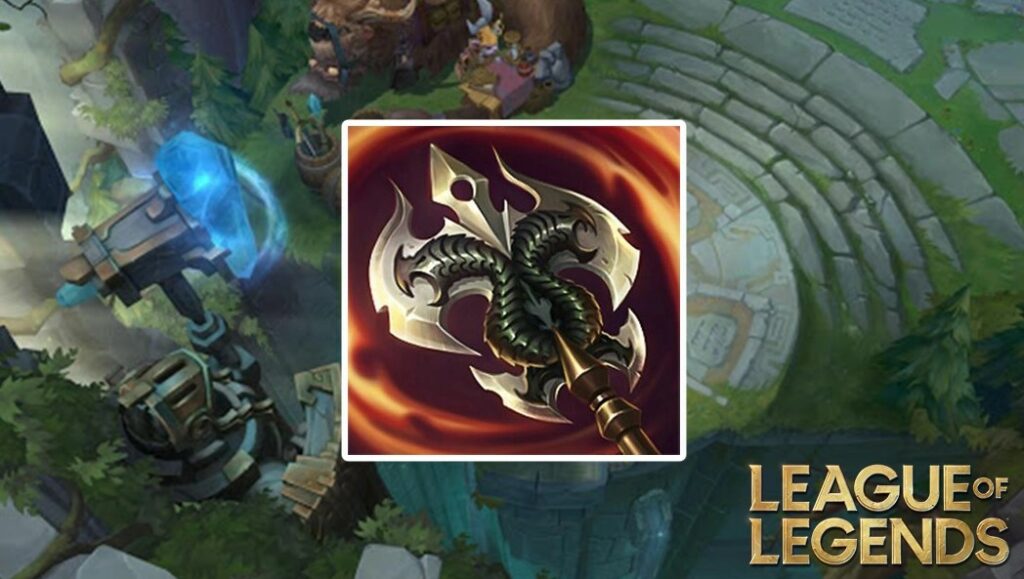 There are lots of interesting stuff and trivia regarding Ravenous Hydra. The item’s Cleave passive has a few intriguing interactions, and if you wish to maximize its value, you need to learn more about them. Here are a few cool facts:

Question: What is Ravenous Hydra good for?

Answer: Ravnous Hydra provides a nice increase to your overall physical damage. We also shouldn’t neglect its ability haste and omnivamp. Most players like it because of its Cleave feature that allows you to hit several opponents at once. This can be very important for some other passives and abilities.

Answer: The item works for both ranged and melee heroes. However, its Cleave damage does from 12% to 60% AD physical damage based on how close you are to the target. In other words, this would make ranged abilities and attack less potent than melee ones.

Answer: You can’t have two Hydra items in your inventory. So, there is no chance for these effects to stack in the first place.

Question: Is Omnivamp a lifesteal?

Answer: Omnivamp is a type of lifestealing ability. Unlike lifesteal, which triggers on physical abilities, omnivamp restores health based on any type of a damage.

Ravenous Hydra is somewhat of a niche item. Players often criticize for lacking that extra damage that would allow you to annihilate the enemies. At the same time, omnivamp can feel a bit weak even if you have lots of damage. Even ability haste can feel unimportant. Then again, it depends on your other items and the champion you’re playing.

Despite all these issues, it is a fun purchase. The splash damage is a relatively unique feature. In theory, stacking omnivamp with other sources of sustain can create really tanky characters. Unfortunately, in practice, there are much better objects that would allow you to accomplish this.