Morellonomicon is a strong mage/assassin item that shines against teams with healers. It is also very good against champions who rely on lifesteal and regeneration for survival. Besides Summoner’s Rift, the item is also present in Wild Rift and Teamfight Tactics.

Morellonomicon has some similarities to Chemtech Putrifier. In terms of stats, it will only give you health and ability power. However, its 80 ability power is pretty solid for an item that costs 2,500 gold. Unfortunately, it can feel a bit lackluster due to its specific passive. In most cases, it is bought as a situational item, but you will rarely see it as a core purchase.

In this Morellonomicon guide, I will explain the item, its positives and negatives, and how you can benefit from having it.

Morellonomicon is a legendary item that is ideal for AP-reliant champions. Its passive Affliction is ideal against champions who rely on healing, regeneration, and life-stealing.

Morellonomicon has a gold efficiency of 96. 27%, which puts it in the lower category of items. In fact, if you have no use of its unique passive, you shouldn’t even consider purchasing it. This item costs 2,500 gold, and you can sell it for 1,750 gold. Champions are limited to having just one Morellonomicon in their inventory, but given how it passive works, you should never have more than one anyway.

To assemble the item, you need to buy Ruby Crystal for 400 gold, Oblivion Staff for 800 gold (436 for Amplifying Tome and 365 gold for recipe), Blasting Wand for 850 gold, and Morellonomicon recipe for 450 gold.

The item provides 80 ability power and 250 health. These are probably the two most common stats for AP damage dealers. As such, you can build it on any champions who focus on ability power to dish damage. You could argue that the health component is a bit less important for backline mages. Nevertheless, your character can always benefit from this health boost.

Morellonomicon’s passive is called Affliction. Whenever you cause magic damage to an enemy, that target will receive 40% grievous wounds debuff for 3 seconds. If the target has less than 50% health, they will receive 60% grievous wounds for 3 seconds. This effect will always apply regardless of the magic damage source. In other words, you can even apply it with basic attacks, which makes Morellonomicon much more versatile. 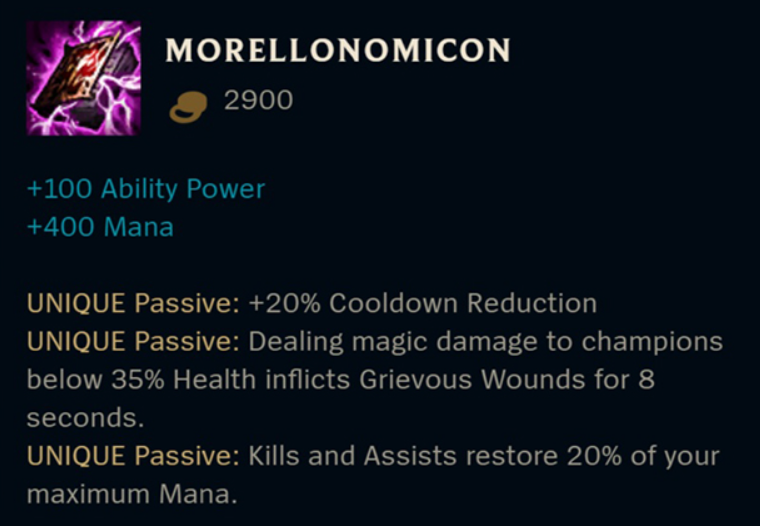 Unfortunately, the item is not good for all situations. As mentioned, it isn’t particularly efficient in terms of its stats. If the enemies do not have healers or champions with strong lifestealing, Morellonomicon can feel like a waste of inventory space.

Another potential issue can occur in regular games, where people are reluctant to buy utility items and instead prefer dealing as much damage as possible. This would make Morellonomicon even more undesirable.

The positive thing about the item is that you can apply a debuff on several enemies if you have AOE spells. This can significantly increase its usefulness in clutch teamfights. Furthermore, the item feels better in high-ELO matches, where there is more coordination and people know their roles.

Nowadays, Morellonomicon is completely different from what it was back in the day. Truth be told, it received the grievous wound passive back in 2012, but it didn’t have the effect from the get-go.

Instead, its first version was introduced in patch 1.0.0.111, and it had a 15% reduced cooldown passive. Morellonomicon also gave the user 75 ability power and 12 mana regeneration over 5 seconds. The item was made from Blasting Wand, Fiendish Codex, and recipe. Its total price was 2,350 gold.

The grievous wound effect was introduced in version 1.0.0.139, and it was an active ability. In the same patch, the ingredients were changed, and instead of Blasting Wand, you needed Kage’s Lucky Pick to build into Morellonomicon.

Several things were changed during the 1.0.0.152 patch. From this point onward, the item was called Morellonomicon, thus referring to Morello’s Evil Tome. Its price went from 2,330 gold to 2,200 gold, and the cooldown passive was swapped for grievous wound effect. The new unique would only debuff enemies who are below 40% health. Grievous wounds lasted for 4 seconds.

For a few patches, Riot has experimented by changing Morellonomicon’s base components. At one point, the item required Faerie Charm, Amplifying Tome, and Forbidden Idol. While the base item changed, the price remained the same throughout.

The item received a major overhaul in version 6.9. Instead of utilizing Forbidden Idol, the recipe now required Lost Chapter. Furthermore, Morellonomicon’s overall cost went from 2,400 to 2,900 gold. Although the item became much more expensive, it received several buffs to go with that.

First off, the ability power gain went from 80 to 100. While the mana regeneration component was eliminated, Morellonomicon now provided 400 mana and a 20% cooldown reduction. Also, when you made kills and assists, you would restore 20% of your max mana.

Grievous wounds passive was also changed. Instead of a 40% health threshold, it now required the enemy champion to be at 35% health or lower. But, the debuff duration went from 5 seconds up to 8. So, while it was harder to apply grievous wounds, they would last for a longer time.

Regardless, the item still didn’t feel complete, so the team made another major change in version 8.4. Its recipe was completely altered, and instead of utilizing Fiendish Codex, Lost Chapter, Amplifying Tome, and recipe, you now required Blasting Wand, Oblivious Staff, and recipe. Morellonomicon icon was also updated.

Perhaps the most significant change had to do with grievous wounds passive. The threshold was completely removed, and anyone struck with magic damage would instantly receive the debuff. On the flip side, the effect no longer lasted 8 seconds but instead, only 3 seconds.

In the 10.23 patch, the icon was updated once again. Furthermore, the developers decided to add Ruby Crystal to the recipe while reducing the overall cost by 500 gold. This is the same formula we have today.

Nothing was touched in terms of the base stats. However, Riot removed magic penetration and slightly reworked its passive. Instead of being called Cursed Strike, it now became known as Affliction.

There were a few minor updates after this, but nothing of significance.

The Most Common Morellonomicon Users

Morrelonomicon is great on all ability power users. However, it seems that it’s slightly better on melee assassins because of the health component. Although added health works for mages as well, you might want to focus on more damage and ability haste with these characters.

Given the nature of the item, it isn’t surprising that Morellonomicon is rarely purchased. It is bought in 3.4% of matches, although it has a solid win rate of 51.8%. As mentioned before, its viability varies depending on the in-game situation and the team you’re up against.

The best champions to use this item are Shaco, Teemo, Zyra, Lillia, Swain, and Morgana. Out of them, Shaco has the highest win percentage when equipping Morellonomicon at 54.9%. The second is Teemo, with a 54.7% win chance, and Morgana with 54.5%.

Morellonomicon is commonly combined with other caster items such as Rabadon’s Deathcap, Rylai’s Crystal Scepter, Cosmic Drive, Banshee’s Veil, and Demonic Embrace. Given that the item is better suited for melee champions who require protection, it makes sense that people would combine it with things such as Demonic Embrace and Banshee’s Veil to get a mixture of offense and defense. 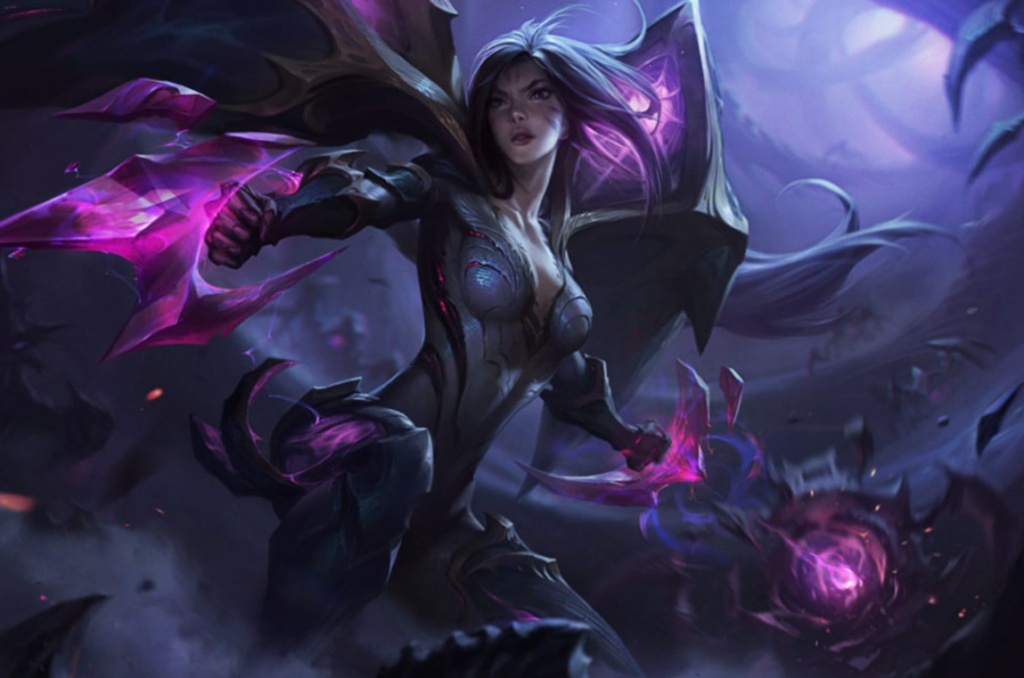 In many ways, Morellonomicon is quite a peculiar item. Although not the most popular pick up, it can work really well in certain situations. Here are some interesting facts about it:

Question: Why is the item called Morellonomicon?

Answer: The item changed its name several times. However, since its inception, it was associated in one way or another with Ryan “Morello” Scott, a lead character designer at Riot. “Morellonomicon” is a combination of “Morello” and “Necronomicon,” a fictitious Book of the Dead.

Question: Is Morellonomicon good on supports?

Answer: This item is rarely bought on supports. It is much more common for assassins, and you will sometimes notice it on mages.

Question: How do grievous wounds work?

Truth be told, very few people want to build this item. It is mostly popular among assassins who want to finish a kill without having to worry whether the target will come back to life with healing. Morellonomicon is much more potent with AOE spells as the debuff will affect all enemies.

While very strong in certain situations, there are a few issues that prevent it from becoming a staple purchase. First off, it has a very low gold efficiency. Most champions want to buy something else, so they are very reluctant to go with Morellonomicon even if their team benefits from the purchase.