Lich Bane is a legendary item that is perfect for AP champions who rely on basic attacks. While the Spellblade ability is not unique to Lich Bane, this is the best option for ability power-based characters. On top of that, the item also provides a significant boost to ability power, ability haste, and movement speed.

Lich Bane is just 89.04% gold efficient, making it one of the weaker legendaries in the game. However, it can still be useful on hybrids and AP auto-attackers such as Twisted Fate and Akali. Lich Bane gets much better as you increase your ability power, allowing you to nuke enemies with Spellblade.

In this Lich Bane guide, we will take a look at the item stats, their changes over time, and ideal users.

Lich Bane is one of the oldest items in League of Legends. It improves your ability power, ability haste, and movement speed, giving you access to powerful unique called Spellblade. 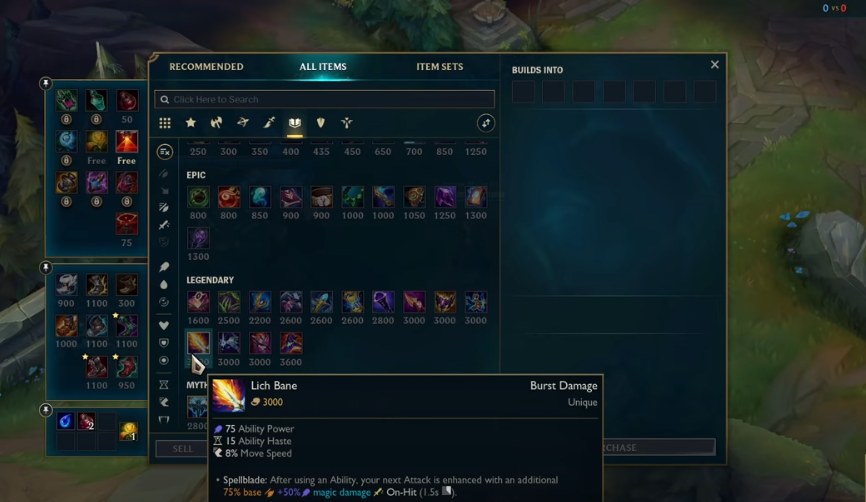 Lich Bane has some similarities with items such as Divine Sunderer, Essence Reaver, Trinity Force, Nashor’s Tooth, and Guinsoo Rageblade. It provides a nice mobility boost to your champion, making it easier to close the distance between two. Once you’re in the attack range, you can rely on the powerful Spellblade effect to decimate the target in a blink of an eye.

This magical object gives you 75 ability power, 15 ability haste, 8% movement speed, and a unique passive called Spellblade. When you use an ability, you will receive a 10-second buff on the champion that will make your next basic attack significantly stronger. The empowered strike will deal 75% base attack damage plus 50% ability power as a bonus magical damage.

Once you use Spellblade buff, it will dissipate and will be placed on a 1.5-second cooldown. You will have to use an ability once again to reapply it. The cooldown is very important as it prevents multiple applications of the effect. Instead, you will have to make an ability rotation where you will utilize the next spell only after using the Spellblade effect.

Ideally, you should use this item on champions with low cooldowns (or who have at least one ability with a short cooldown). That way, you can continuously spam the Spellblade effect. Keep in mind that it’s suboptimal on mages, as you are reliant on the basic attack to proc the effect.

While this item focuses on ability power, it also benefits from attack damage. In fact, it causes more damage through AD than through AP. You can easily recognize the buff as it provides a purple glow on the champion that is using it. For example, Shaco will have glowing hands when the buff is ready, and Kog’Maw will have a purple glowing mouth.

To further boost your damage, you can utilize attack modifiers. A good example of this is Pick a Card ability on Twisted Fate or Hextech Munitions on Corky. 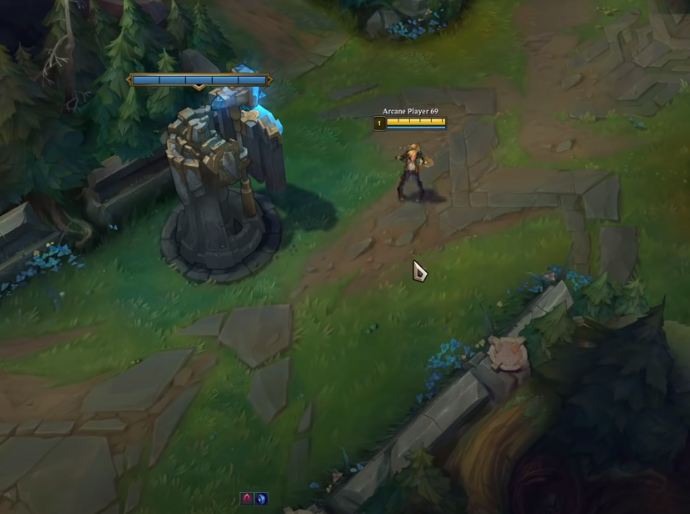 As one of the oldest items in the game, Lich Bane has suffered an incredible number of changes. It was initially introduced on the 9th of May, 2009. Since its inception, it was meant to be used on AP carries. The item was classified as a high-tier AP/mana item.

The first iteration of Lich Bane was made by combining Blasting Wand, Sheen, Amplifying Tome, and a 710-gold recipe. It gave the user 110 ability power, 350 mana, 10% movement speed, and a passive. After using an ability, this unique effect would apply AP to your following basic attack.

So, the first version of the passive was very similar to modern-day Spellblade. Of course, over time, it was modified to encompass attack damage as well.

In the following few patches, Riot has polished the item, removing bugs and unnecessary effects. For example, the first version of passive was able to crit and its effect stacked with that of Sheen, making it extra powerful. Keep in mind that this passive didn’t have a cooldown, which was another issue that was resolved in the future versions.

On June 26th, 2009, the item experienced a few bigger changes. Instead of utilizing Amplifying Tome for its formula, it now required Null-Magic Mantle. The recipe went from 710 gold to 950 gold, and the total price of the item was 3,465 gold. Movement speed was reduced to 7%, and ability power was nerfed to 80. However, Lich Bane has received a new magic resistance component, providing a champion 32 magic protection.

In version 0.8.22.115, the developers have finally addressed the issue with the cooldown. It received a 3-second cooldown after use, but it was also fixed so that it works with all spells. This system was further polished and improved in the following patches, and it went from 3 seconds to 2 seconds.

Like many other items, Lich Bane experienced major changes in the 1.0.0.152 version. The Null-Magic Mantle component was removed, and the item no longer provided magic protection. Subsequently, the recipe cost went from 3,470 to 3,000 gold. The mana gain was reduced from 350 to 250, movement speed went from 7% to 5%, and passive was reworked so that it does 50 + 75% AP magical damage.

In patch 4.4, the Spellblade effect was altered, so it resembles the current version. It now applied a buff that does 75% base AD and 50% AP. In the next few versions, the developers made a few extra changes, and one that is worth mentioning is the cooldown reduction from 2 seconds to 1.5 seconds.

Riot made a few more changes to Lich Bane in patch 5.22. The new recipe included Sheen, Blasting Wand, Aether Wisp, and a recipe for a total of 3,200 gold. It now gave the user a 10% cooldown reduction, and its movement speed was restored to 7%.

Patch 10.23 was another big one. The Lich Bane cost was slightly increased by 200 gold. It now gave the user 80 ability power and 10% movement speed, but the item lost mana and cooldown reduction stats. Instead of giving a champion 75% base AD and 50% AP, the Spellblade proc would deal 150% base AD and 60% AP.

All these changes made the item much better for champions focused on AD however, the perks for AP characters were not reduced. From this point onward, you could have only one Lich Bane in your inventory.

The item received its final update in version 12.2, receiving the ability haste component. Developers increased the AP component and reduced the AD component of Spellblade. Lastly, the Spellblade cooldown went from 2.5 seconds to 1.5 seconds.

The Most Common Lich Bane Users 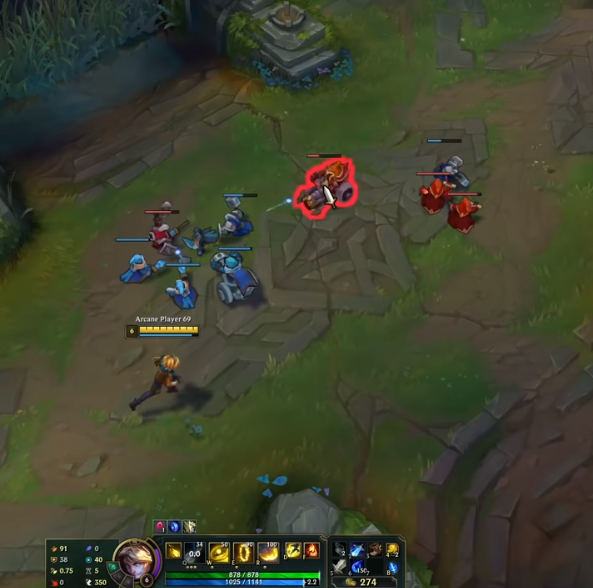 Based on almost 190,000 matches, Lich Bane has a win rate of 57.04% and a pick rate of 16.64%. This makes it one of the commonly utilized magical objects in League of Legends. The great thing about Lich Bane is that it provides your builds a lot of flexibility. All the stats are focused on offense, making it ideal for assassins and other characters who need a high burst to be effective.

The item provides the highest win rate on Kayle (a 71.19%-win rate). However, Lich Bane is a very situational item on this champion, and she will buy it in only 3.88% of all games). Kassadin has a 65.26%-win rate when buying Lich Bane, and it gives Ahri a 64.33%-win chance when wearing the item. Ahri will buy the item in only 0.82% of games, so, like with Kayle, it would be a highly situational pickup for this champion.

Based on all of this data, it seems that Lich Bane is a much better purchase later on in the game.

The Most Popular Builds That Include Lich Bane

Generally speaking, you can pair up Lich Bane with almost anything. It allows you to tinker with various builds, but most players focus on AP-increasing items. One of the items that you’ll frequently see with Lich Bane is Sorcerer’s Shoes, which makes sense given that these are the best boots for AP builds.

Here are the most common builds involving Lich Bane:

As you’ve noticed, Zhonya’s Hourglass is probably the second most popular item that goes with Lich Bane. It provides cooldown reduction, a stat that goes really well with Spellblade, but also a massive amount of AP. Zhonya’s Hourglass is especially important for melee assassins as it provides them extra protection against attackers. That way, they can jump into the fray, cycle abilities to maximize the Spellblade effect, and safely return from the engagement.

I don’t even have to explain why Rabadon’s Deathcap is so potent. It works really well for any AP build by providing a massive increase to the user’s total ability power. Furthermore, the item scales really well into the late game. 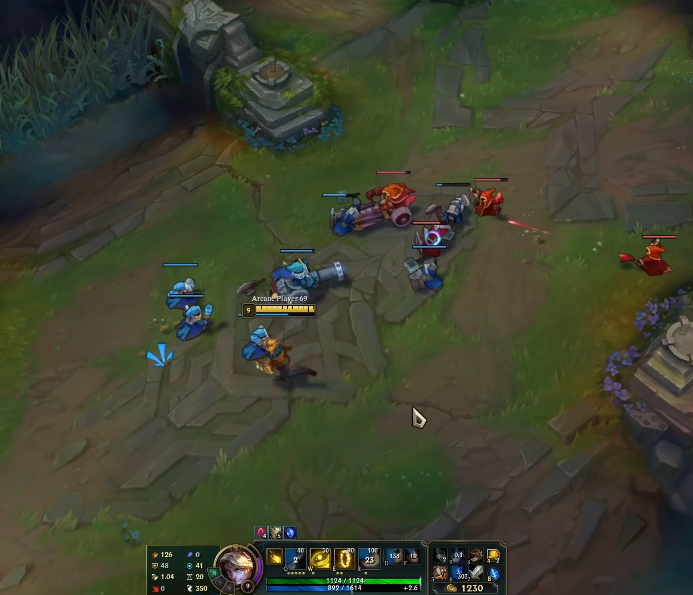 Spellblade is a really specific effect. There are a lot of things you need to know about it to maximize its potential. So, here are some interesting facts about the item and how it works within the actual games:

Question: What is Lich Bane good for?

Answer: Lich Bane is a great item for assassins and various hybrids who rely on ability power, ability haste, and increased movement speed. By rotating your abilities in proper cycles, you can maximize the potential of its unique passive called Spellblade, quickly disposing of squishy enemies.

Answer: Lich Bane makes sense on a plethora of champions. Generally speaking, you can make it on 22 different characters, and some of the best ones are Twisted Fate, Akali, Katarina, Fizz, Kayle, Kassadin, etc.

Question: Is Lich Bane worth it?

Answer: While Lich Bane is not that cost-efficient, it does scale nicely into the late game. In fact, it provides a higher win chance probability the later you buy it. This has to do with the fact that the item’s potency increases with your AD and AP. So, depending on a particular situation, you might consider buying it.

Answer: Lich Bane’s Spellblade is considered an on-hit effect. Each time you use an ability, you will get a buff that lasts 10 seconds. Once you strike the enemy, this effect will activate, damaging an opponent for extra damage.

Lich Bane is a solid legendary item that works well for AP-reliant champions. While it doesn’t have any defensive stats, it provides a lot of offense and cooldown reduction that will allow you to nuke enemies in a blink of an eye.

The item revolves around the Spellblade effect. To maximize its potential, you should have high ability and attack damage. This allows a player to tinker with the builds and find the one that suits them the best.