Gargoyle Stoneplate is an item you can find on Summoner’s Rift and in Teamfight Tactics. It is a legendary object that significantly increases your defensive prowess.

Gargoyle Stoneplate will increase the wearer’s armor, magic resistance, and it will provide ability haste. It has an active effect called Monolith, as well as passive unique Fortify. Monolith ability will shield the user for a short duration, while Fortify increases your defenses each time a different champion hits you. This makes it ideal for initiators who want to attract the attention of the whole enemy team.

In this Gargoyle Stoneplate guide, I will review the item’s stats, talk about optimal users and builds.

Gargoyle Stoneplate is one of the best defensive items in League of Legends. It gives tanks everything they need, from armor to magic resistance and ability haste.

Although Gargoyle Stoneplate has a relatively low gold efficiency of an 81.21%, its uniques are what makes it so great. The combination of Fortify and Monolith will make your champion incredibly overpowered, allowing you to hold the line while the rest of your team pummels the enemy from behind.

This particular item costs 3,200 gold, and it can be sold for 2,240 gold. You are limited to having just one Gargoyle Stoneplate in the inventory. The magical object bears some similarity to Locket of the Iron Solari, Zhonya’s Hourglass, Zeke’s Convergence, Sterak’s Gage, and Maw of Malmortius.

As mentioned, the stats themselves are not that impressive. You get 60 armor, 60 magic resistance, and 15 ability haste. If you were to buy the item, you would do so to gain access to Monolith and Fortify.

Monolith will create a shield that provides 100 damage protection plus 100% protection based on bonus health. The effect will perish over 2.5 seconds. You will also increase in size while having Monolith buff. The active has a 90-second cooldown. Keep in mind that activation of Monolith will not break stealth, and it is applied instantly.

Fortify is a passive effect that provides 5% bonus armor and magic resistance for 6 seconds whenever you are attacked by an enemy champion. Fortify effect can stack up to 5 times for a total of 25%. You can gain stacks only when a different champion hits you.

Basically, the combination of the two would allow you to jump into enemies without worrying about incoming damage. Monolith buff is instantaneous, which makes it awesome in such situations. Furthermore, you can boost its effect with every item that provides health stat.

Similarly, to maximize the potential of Fortify, you would want to engage as many enemies as possible at once. So, champions with taunt such as Shen can especially benefit from this unique. 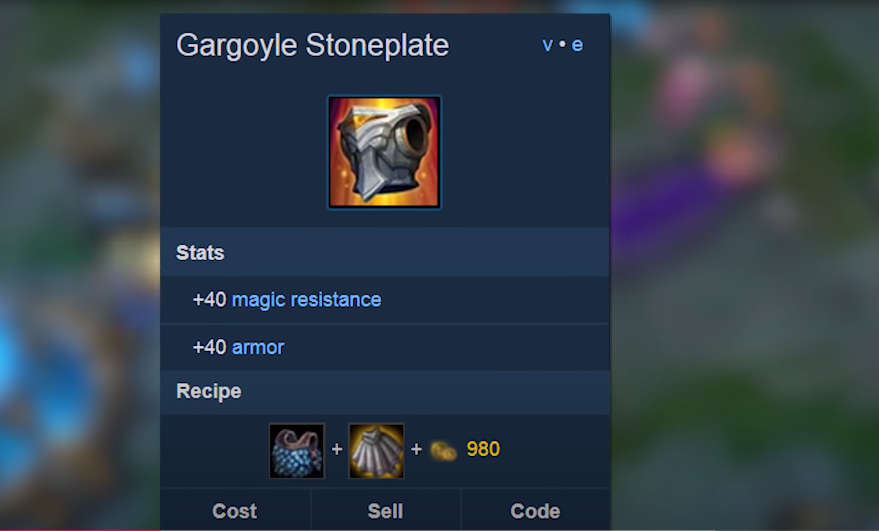 Gargoyle Stoneplate is one of the recent introductions. It was added in the 7.9 version and initially required Chain West, Negatron Cloak, and a recipe to be assembled. In this patch, it cost 2,500 gold and provided 40 magic resistance and 40 armor.

The first iteration had two passives called Stone Skin and Metallicize. As you can presume, both of these were defensive. Stone Skin passive unique would give the champion an extra 40 magic resistance and armor when there are 3 or more enemies nearby. In that sense, it somewhat resembled Fortify providing perks as the number of opponents increases.

Metallicize was a unique active ability that would increase the wearer’s health by 40%. It would also increase the champion’s model size. However, while the effect lasted, you would dish 60% less damage for 4 seconds. It had the same cooldown as Monolith at 90 seconds. If a champion also had Stone Skin buff, it would gain a max health increase of 100%.

In the following patches, the developers addressed a few bugs with the item. Among others, they changed how Cinderhulk and Metallicize interact.

In patch 7.18, the developers did a lot of work on Metallicize. The ability would now proportionately affect both base and bonus health. As mentioned, the health gain was previously classified as bonus health, and your base health would be considered as bonus health for purposes of other buffs. This led to some unwanted interactions with other items and abilities.

In this patch, you could no longer scale Metallicize with Nunu’s Consume or Stoneborn Pact. Riot once again addressed issues with Cinderhulk. After the patch, the effect would be applied once after Metallicize buff. To be more precise, you would previously gain bonus health from Metallicize, and then, Cinderhulk would calculate extra health on top of base and bonus health.

By doing this, Riot prevented an exploit that would give players lots of extra health and thus tankiness.

In the following few versions, the developers made a few tweaks to the ability cooldown as well as the overall cost of the item.

The 10.23 version was a major game-changer for League of Legends. Riot made massive updates to all magical objects and certain effects. They also changed how they classify items. As for Gargoyle Stoneplate, it received a new icon, and you could have more than one in inventory. However, this is just the start of the changes.

As for the base stats, you would no longer gain 40 armor and 40 magic resistance but instead 60 armor, 60 magic resistance, and 15 ability haste. The unique passive and active were also replaced by Monolith and Fortify.

Gargoyle Stoneplate received the last update in the 11.23 patch having its cost reduced from 3,300 to 3,200 gold. Riot also implemented a new tooltip that would track how much damage you managed to block with the Monolith shield.

The Most Common Gargoyle Stoneplate Users 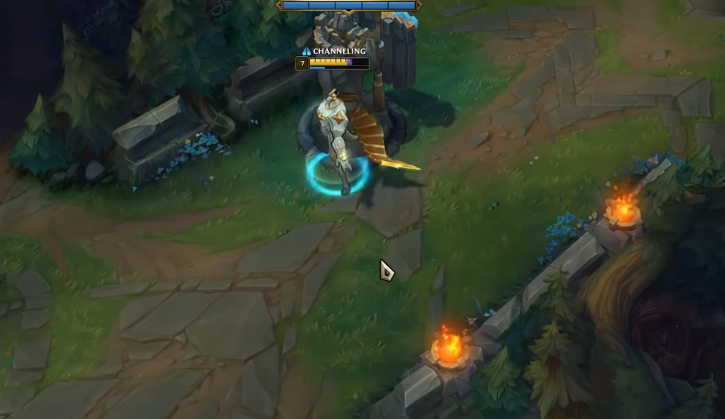 While very strong, Gargoyle Stoneplate is rarely purchased in games. This is because there is always something else you would like to prioritize on tanks. It is most commonly bought as the third item (30.38% of all purchases), and in these situations, it has a 60.67%-win probability.

Gargoyle Stoneplate is a good option on 30 different champions. These are usually fighters and tanks. Overall, the item has a win rate of 60.02% and a pick rate of 3.96%.

While the item is not that common of a purchase, it can be really powerful in certain situations. For example, you can see it on Skarner in just 1.08% of cases, but in these situations, it can provide a whopping win rate of 74.51%. When bought on Rammus, it gives you a 69.99% chance of winning the game, and it has a 66.82%-win rate on Mordekaiser.

The item is most commonly bought by top lane champions, but you can sometimes see it on junglers.

The Most Popular Builds That Include Gargoyle Stoneplate

After that, you can often see a combination of Gargoyle Stoneplate and Turbo Chemtank, which has a 62.7%-win rate. Other popular builds include Fimbulwinter (62.3%-win rate), Sterak’s Gage (61.5%-win rate), and Dead Man’s Plate (61.4%-win rate).

The reason why the Gargoyle Stoneplate/Demonic Embrace combination is so powerful is because of its synergy with Monolith. Demonic Embrace gives you a massive 450 health boost, which can be turned into a shield when you activate the unique passive. However, the item combination is much better for champions who rely on high AP to be effective.

Turbo Chemtank has some similarities with Demonic Embrace. To be precise, it gives the user 350 health which, once again, synergizes well with Monolith. This item is much more suited for tanks as it gives you extra 25 armor and magic resistance. Lastly, its active unique called Supercharged is especially important for initiation.

Fimbulwinter gives a champion 15 ability haste, 400 health, and 860 mana. Besides its base health, the item provides an additional health boost through its passive called Awe. This effect will give you extra health equal to 8% of your total mana. Its other unique called Everlasting gives you a shield effect making the champion even tankier.

Sterak’s Gage is good for the same reason as the previous entries providing extra health and having a passive unique Lifeline that gives you a temporary shield. Dead Man’s Plate has 300 health, 45 armor, and 5% movement speed, which gives it everything a tank would ever need. 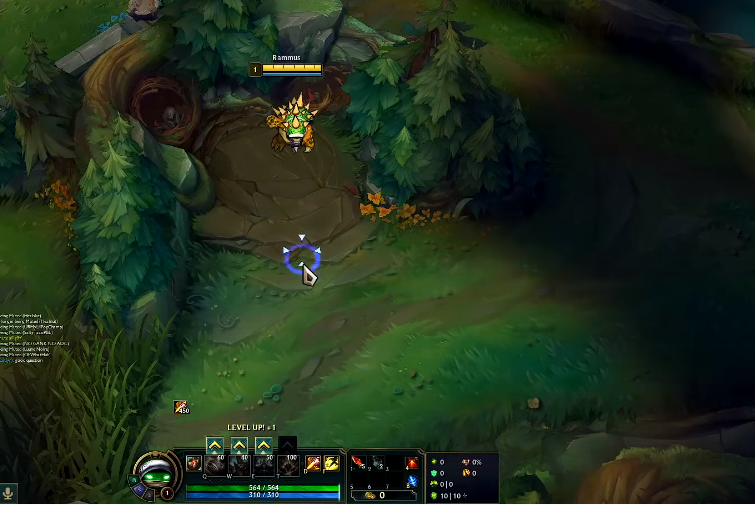 There are a few interesting trivia and tidbits regarding this item:

Answer: While the item itself doesn’t make you bigger, its active effect Monolith does. When you activate the ability, you will grow in size for 2.5 seconds, which is the duration of the shield.

Question: How good is Gargoyle Stoneplate?

Answer: Although Gargoyle Stoneplate is not particularly gold efficient, it provides a great boost through its unique passive and active. Fortify, and Monolith can be very good for tanks who can initiate into the whole enemy team. In fact, as more enemies target the wearer, he becomes significantly stronger.

Question: How do you use Gargoyle Stoneplate?

Answer: Gargoyle Stoneplate is ideal for tanks and fighters. Its Fortify ability increases your defenses with every enemy that damages. This effect stacks up to 5 times, forcing you to charge straight into enemy team to maximize its potential. The active effect, Monolith, creates a shield around the user that becomes stronger as you get more bonus health. It is important to activate this shield just before taking damage in order to get the most out of it.

Gargoyle Stoneplate is a relatively new item, but it already went through a few iterations. Initially, it was really strong and provided a massive health gain. While these bonuses haven’t completely changed, it now feels a bit more balanced.

The magical object will give a tank everything that he needs including 60 armor, 60 magic resistance, and 15 ability haste. Although it doesn’t have the health stat, it gets much stronger when combined with items that provide extra health. For example, it can feel amazing with Demonic Embrace and Turbo Chemtank.

Gargoyle Stoneplate is rarely bought as the first or second item. Instead, it is much more efficient as a third or fourth pickup. Due to the nature of its passives, it will remain relevant throughout the game.