Essence Reaver is a legendary item ideal for physical damage carries. It also has a mana restore feature that helps your sustain during the game. You will commonly see it on champions such as Riven and Graves, but it works well on numerous other characters who want to quickly overwhelm their opponents.

To get the most out of Essence Reaver, you shouldn’t build other Spellblade items. Furthermore, champions are limited to having just one Essence Reaver in their inventory. While the item provides a nice offensive boost, it doesn’t do much for your defense.

Essence Reaver is an item tailor-made for ADC who utilize mana and have short cooldowns. If you’re looking for something to increase a champion’s offensive capability, this item is very cost-efficient.

The item provides 45 attack damage, 20 ability haste, and 20% critical strike. All of these stats have a nice synergy. This is especially true for ability haste, which works well with Essence Reaver’s passive, Spellblade. The combination of damage and critical chance scales nicely with Spellblade. It allows you to quickly rush and annihilate single opponents.

Like many other offensive items, you don’t have to rush Essence Reaver. Instead, you can mix up a few minor offensive and defensive items, and when you’re ready, you can invest a bit more gold to finish the recipe. This magic object has some similarities with Infinity Edge, Phantom Dancer, Rapid Firecannon, Runaan’s Hurricane, and Stormrazor.

As mentioned, the item has a unique called Spellblade. Besides Essence Reaver, this effect is also present on Sheen, Lich Bane, Divine Sunderer, and Trinity Force. Whenever a champion uses a spell, the next auto-attack will deal 100% base AD bonus physical damage and +40% bonus AD.

Spellblade effect also restores mana, which can be redundant on certain characters. The mana restoration equates to 40% base AD and 16% bonus AD. You have 10 seconds to perform this empowered strike after using an ability. If 10 seconds pass, the buff will vanish. Spellblade has a 1.5-second cooldown, which prevents champions from spamming abilities to quickly nuke opponents.

The Most Common Essence Reaver Users

There are lots of champions who can benefit from the item. The list includes Xayah, Sivir, Lucian, Kindred, Miss Fortune, Riven, Master Yi, etc.

Given that the item has a critical strike and a unique that relies on your physical damage, it will work much better with champions who have high base damage. That being said, it can also be nice for champions with armor penetration, although the item itself doesn’t have any armor penetration on it.

Although this item provides ability haste, you don’t necessarily have to buy additional items with haste unless your cooldowns are very long. Ideally, you would make ability rotation so that you can trigger Spellblade every 1.5 seconds.

For example, someone like Miss Fortune won’t benefit too much from extra ability haste when running Essence Reaver. Her Double Up ability already has a 3-second cooldown, so the Spellblade effect will always be available.

The Most Popular Builds that Include Essence Reaver

In this particular patch, Essence Reaver is considered a mediocre item. For example, on a scale of 1 to 5, it would probably get a 3.

Perhaps the biggest issue is that some of its stats and effects can feel a bit redundant. Some heroes won’t be that dependent on mana or might not need it whatsoever. Perhaps you’re not that dependent on ability haste, and your skills already have a low cooldown as it is.

No matter the case, the item is not for every champion. Here are some of the best builds where you can maximize its potential:

Berserker’s Greaves are a common pickup on carries, so it isn’t particularly surprising that you’d seen them on all these champions. While they don’t give too much movement speed, compared to some alternatives, the attack speed increase is simply crucial for this role.

In order for Infinity Edge’s unique passive to work, you need an additional source of critical. Some of the champions will build into The Collector to gain the remaining 20% critical strike chance that would give that the 35% bonus to critical damage. The item also provides lethality, which can always come in handy on physical damage dealers.

Due to the fact that the item provides the Spellblade effect, you won’t have to build other items with this unique. Something like Trinity Force would be completely redundant on champions with Essence Reaver, even though it would give you a slightly better version of Spellblade passive. 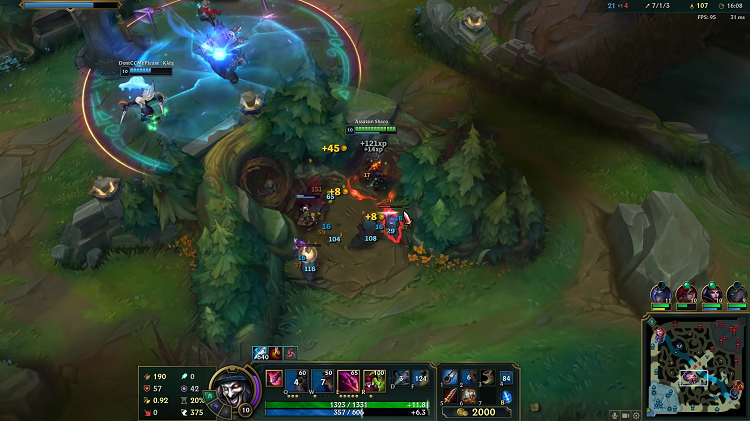 Essence Reaver is a very old item that was introduced in 2014. Over time, it has gone through numerous changes and iterations. As such, there are lots of interesting tidbits about it:

Question: What Does Essence Reaver Do?

Answer: Essence Reaver is a strong, offensive item that provides 45 attack damage, 20 ability haste, and 20% critical strike. It also has Spellblade passive unique that increases your physical damage for one strike after using an ability. Also, Spellblade can help you restore mana with each hit.

Question: Does Essence Reaver Give Mana?

Answer: Back in the day, Essence Reaver would provide extra mana. This feature was removed, and instead, Riot has introduced a critical strike.

Essence Reaver is a great offensive item. It will basically give your champion everything it needs to quickly decimate opponents. Both critical strike and damage boosts are great, and haste can also come in handy. However, if you were to buy it, you would likely do so for its Spellblade effect.

Spellblade provides a major increase to your total physical damage. If you properly utilize cooldowns, you have a chance to trigger it several times during an engagement. With it, you can nuke even the tankiest targets.