Banshee’s Veil is a legendary item that is ideal for mages. It provides a combination of offense and defense. Among others, it is known for its enormous ability power (especially when you compare its price to other similar items).

The item is 99.62% gold efficient, and it is ideal for mid-lane AP damage dealers. Besides its offensive and defensive stats, Banshee’s Veil also has a nice passive called Annul. The ability will create a shield around the wearer, blocking the next offensive spell.

In this Banshee’s Veil Guide, I will talk about the item’s stats and potential uses.

Banshee’s Veil is a mage item that increases ability power, ability haste, and magic resistance. Its passive unique called Annul can be utilized in various situations to protect the champion from incoming spells.

Banshee’s Veil is a legendary unique that increases user’s ability power by 80, ability haste by 10, magic resistance by 45, and it provides a passive called Annul. The developers have decided to limit the number of Banshee’s Veils in your inventory to one. This was probably done so that you don’t have access to multiple spell shields.

Annul is the item’s unique. This is a pretty straightforward passive that creates a spell shield around the wearer. The protective barrier will block the next offensive ability. The only issue with Annul is that it has a rather long cooldown of 40 seconds. In other words, you will probably utilize it once during a team fight.

As mentioned, 80 ability power gain is simply massive. On the other hand, the item doesn’t provide much in terms of ability haste. Because of that, it is much better for champions with strong nukes who are not necessarily relying on short cooldowns to make an impact.

Due to the fact it also has defensive capabilities, it is more suited for someone like Galio. If the effect was active before you created a clone, it would also transfer to the clone. The unique can also block the vision aspect of certain spells (for example, Twisted Fate’s Destiny). Annul automatically goes on cooldown if you die.

Banshee’s Veil is an item that has been around since the League of Legends’ inception. It was introduced on May 9th, 2009, and it was designed as a mid-tier legendary item that provides mana, health, and magic resistance. Its passive also hasn’t changed a lot providing a magic spell block.

During beta and the first few versions, Banshee’s Veil didn’t experience many changes. The majority of alterations had to do with item price, mana, health, and magic resist reduction/increase. These were mostly balancing changes that would make Banshee’s Veil more or less popular during a particular meta.

The first major update occurred during version 3.10. Riot decided to change the recipe, and instead of Negatron Cloak, Catalyst of the Protector, and recipe, you now had to buy Spectre’s Cowl, Ruby Crystal, and recipe to assemble the time. Its price also went up from 2,520 gold to 2,750.

What’s significant about this patch is that the developers have completely removed the mana component. But they did increase health, magic resistance, and they added a new passive, which provided increased health regeneration for up to 10 seconds. The passive would activate when the shield breaks or when you take damage from an enemy.

Banshee’s Veil experienced a major change in version 4.13 when the shield cooldown went from 25 seconds up to 40. This was a major nerf. Riot once again tinkered with the Veil in version 4.20 when it removed the unique passive that provided regeneration and instead replaced it with a 100% base regeneration increase. 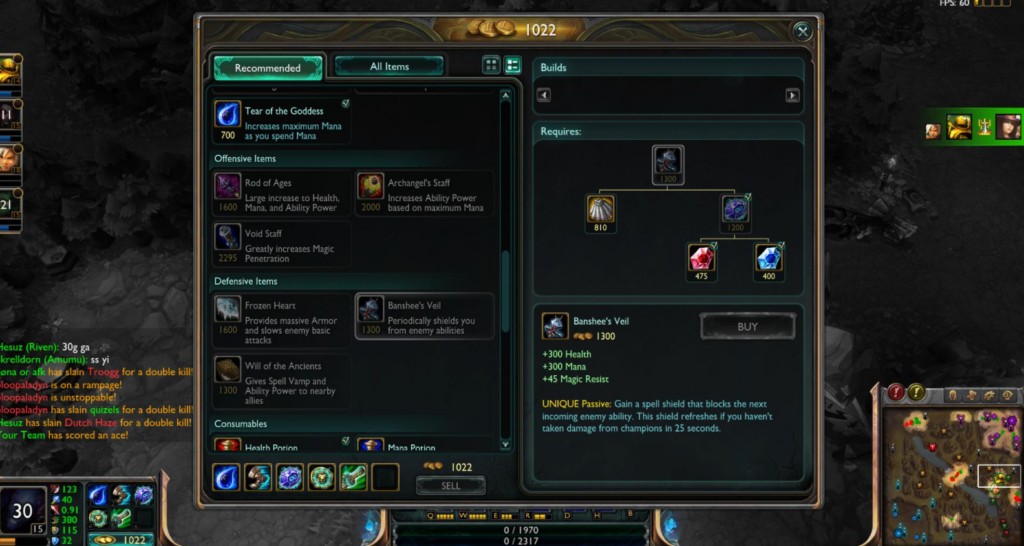 During the following few years, the item hasn’t changed that much. The developers tinkered with its base value and cost, and would occasionally switch up the required ingredients. It had another major rework in patch 7.9 when the previous ingredients, Sceptre’s Cowl, Negatron Cloak, and recipe, were changed for Blasting Wand, Fiendish Codex, Null-Magic Mangle, and recipe.

While the price remained almost the same, the item properties changed a lot in this version. Ability power went from 0 to 70, magic resistance was reduced from 70 to 45, while health and health regeneration were completely removed.

The item was left alone once again after this patch. Excluding a few cosmetic changes and small balance alterations, Riot hasn’t done a lot with Banshee’s Veil until version 10.23. First off, they updated the item’s icon. Instead of Null-Magic Mantle, Fiendish Codex, Blasting Wand, and recipe, it now required Verdant Barrier, Fiendish Codex, and recipe. The price also went from 3,000 to 2,500 gold.

In this version, developers reduced ability to power from 75 to 65 magic resistance from 60 to 45, and they removed 10% cooldown reduction and replaced it with 10 ability haste. They also changed the name of the passive from Spell Shield to Annul, and champions were now limited to having 1 Banshee’s Veil in inventory.

Banshee’s Veil hasn’t received many changes since 10.23. Most of them were minor bug fixes.

The Most Common Banshee’s Veil Users 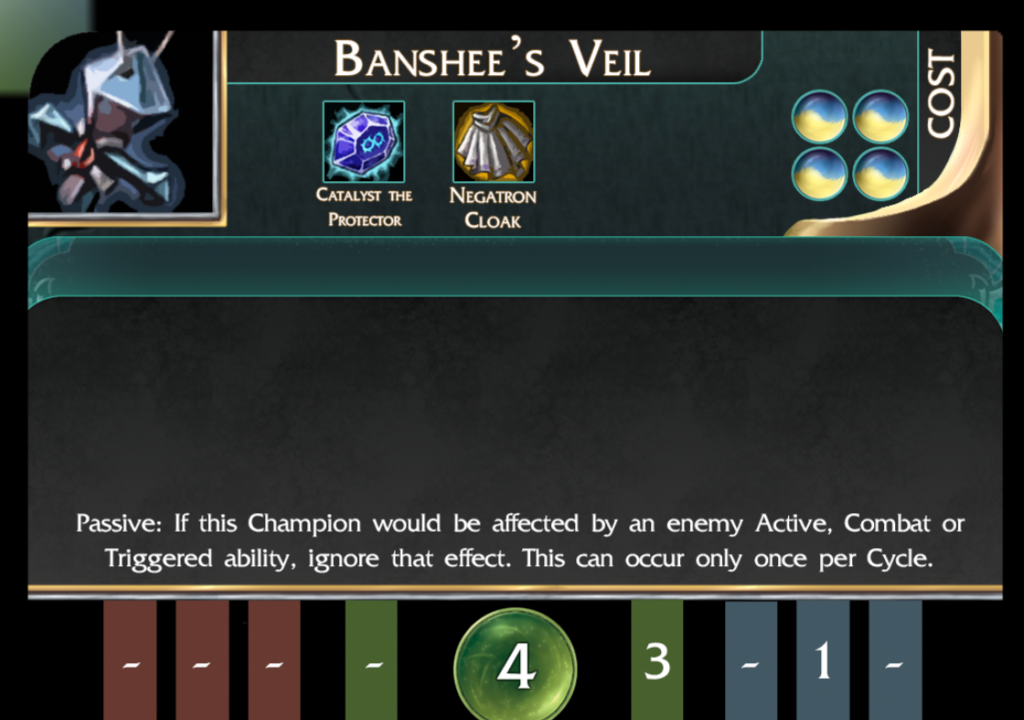 Overall, the item has a 57.51% win rate in this current patch. This is slightly down compared to the previous patch, where Banshee’s Veil had a 58.09 win percentage. It has a pick rate of 8%

Given the versatility of its passive and the fact that anyone can benefit from magic resistance and ability haste, it isn’t surprising that it’s viable on 50 champions. Banshee’s Veil is also very flexible in terms of builds and builds priority. In 25.42% of cases, it is purchased as the first item. Most commonly, players get it as the third acquisition (33.29%). In 19.42% of cases, it is bought as the fourth item.

Banshee’s Veil is not a standard caster item. With it, you’re not just trying to dish damage, but instead, you are protecting your champions from imminent danger. It is much better in higher-tier games where enemies are better at attacking backlines. If you’re playing someone like Veigar or Annie, you can’t simply stack AP and hope for the best as the opposing team will find a way to jump you and nuke you.

Banshee’s Veil shines in these situations. It provides crucial protection against crowd control and other spells that would remove you from battle. The magical object is especially strong against teams who have good initiators and pulling abilities. Annul unique can block spells such as Rocket Grab that would pull the champion into the enemy team. If you also get an item with high armor, it will be very hard to kill your mage character.

The Most Popular Builds That Include Banshee’s Veil 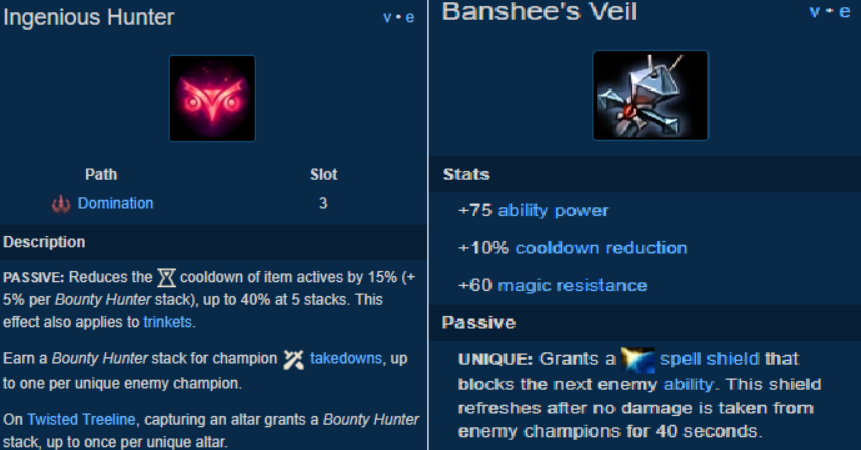 Having in mind that so many champions can buy the item, the potential builds are also very versatile. However, the items you should consider purchasing alongside Banshee’s Veil include Rabadon’s Deathcap, Nashor’s Tooth, Lich Bane, Demonic Embrace, and Cosmic Drive.

Rabadon’s Deathcap is the strongest AP item in the game. It gives you 120 ability power as well as a unique passive called Magical Opus that further increases ability power by 35%. Given that Banshee’s Veil has 80 AP, these two items alone will combine for 200 ability power. With Magical Opus boost of +35%, this will total 270 AP.

Nashor’s Tooth is a hybrid item meant for champions who rely on auto-attacks and ability power to deal damage. This object has a unique called Icathian Bite, which causes your base attacks to deal extra damage based on AP. So, the combination of Banshee’s Veil and Nashor’s Tooth is ideal for champions who need to get close to enemies to use AP-based spells and regular attacks.

Lich Bane is another item for hybrid champions. In many ways, it is very similar to Nahsor’s Tooth. Its unique, Spellbalde, does 75% base AD plus 50% ability power bonus magic damage on hit after using an ability. Besides providing a massive boost to ability power and ability haste, Lich Bane also gives you 8% movement speed.

Demonic Embrace is a legendary that provides 60 ability power and 450 health. It also has a unique passive that gives 2% AP according to your extra health. With the second passive, you are able to debuff enemies and deal damage over time. The DOT is based on your maximum health (8% for melee champions and 4.8% for ranged).

Due to these passives, Demonic Embrace is much better for tanky frontliners than backline mages. It doesn’t have amazing synergy with Banshee’s Veil, but it does provide extra defense and offense.

Question: What does Banshee’s Veil do?

Answer: Banshee’s Veil is a caster item with nice defensive features. It provides users 80 ability power, 10 ability haste, 45 magic resistance, and a unique passive called Annul. This passive creates a shield around the champion that will block the next offensive spell. You can have only one Banshee’s Veil in your inventory.

Answer: Banshee’s Veil is great for protecting your hero from crowd control spells. It gives you a nice mixture of defense and offense, and it is really nice if the enemy team has strong initiators. However, it can also be great for AP tanks, as it helps them stay on the frontline for a bit longer.

Banshee’s Veil can be a great pick-up for both frontline and backline AP damage dealers. It seems like an awesome item for initiators, but it also has its merits for squishy mages. While you can always benefit from Banshee’s Veil on a tank, its viability on mages depends on enemy initiation and whether they can reach you.

The item is much better when going against teams with heavy magic damage. It is less potent against physical damage dealers as it doesn’t provide health or armor. However, if you combine it with a high-armor item, you can protect the champion from almost any source of damage.