In this short Demacia Vice Guide, I will analyze a cool set of cosmetics initially released in 2019. Demacia Vice represents a set of skins intended for Bard, Darius, Garen, Lucian, Vi, Yasuo, Jayce, and Caitlyn. So far, only skins for Garen and Lucian are published. There are rumors that the collection is going to be discontinued, especially given all the trouble Riot has been in lately, so we yet have to see what will happen in the following months.

Demacia Vice is a set of skins that are meant to bring back the spirit of the 80s. To be exact, it was inspired by numerous cop flicks that were constantly invading our TVs. Unfortunately, the collection has encountered more than a few bumps in the road, so we’re not certain when the full set is going to be released.

As you can tell at first glance, this isn’t the Demacia we’re used to seeing. Instead, it is a type of parallel universe where cops can do just about anything they want in their pursuit of justice. Although placed in our 80s, the show is futuristic from the League of Legends universe standpoint.

The first idea of Demacia Vice was introduced in 2017. The collection was a part of a three-game Thunderdome event during Pax West that same year. In terms of the colors and patterns, these skins resemble assets from games such as Streets of Rage, Hotline Miami, and GTA: Vice City.

Basically, all champions from this set were meant to play cops and robbers. For now, we have traditionally good guys and law enforcers such as Garen and Caitlyn, who, in terms of the lore, are perfect for the role of police officers.

Besides Lucian and Garen, the only two published cosmetics, the collection was also meant to feature Vi, Yasuo, Caitlyn, Darius, Bard, and Jayce. Unfortunately, due to all the legal problems Riot has had as of late (harassment lawsuits), we still don’t know when the other pieces will be published.

The only two released champions had their skins published on July 18th, 2019. So, even after 3 years, we don’t have any other skins from the collection.

What’s even worse, Riot hasn’t announced any other cosmetics that might appear in the future aside from the 6 they were meant to publish. So, even if they were to release all the existing content, the whole theme will have just 8 cosmetics in total, which is a very low number according to the modern LoL standards. Just compare it to sets such as the PROJECT series that has more than 20 skins.

Demacia Vice In Other Universes 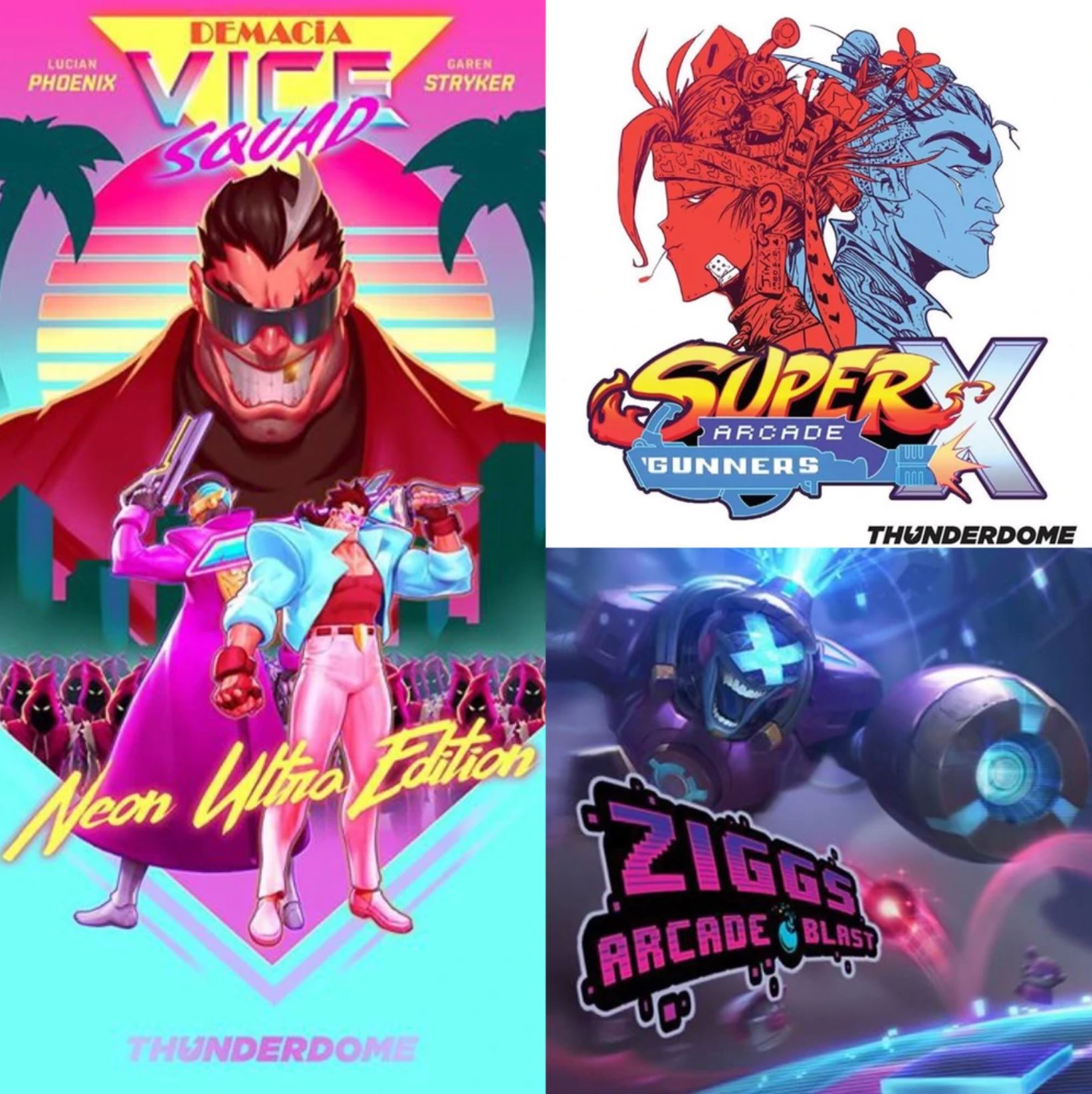 Although a collection with a minimal impact on League of Legends lore and the game’s community, you can notice a few references. For example, Ahri plays Demacia Vice video game in Arcade universe. If you check the corner, you will notice that the champion has 6,000,000 points in the game, which is the current high score.

The designers tried their best to rekindle the spirit of the 80s with this collection. When you have either Demacia Vice Lucian or Demacia Vice Garen on your team, you can hear a remix of the “Demacia Rising” theme, which is appropriately done in synthwave, a genre that has marked this decade.

Detective Garen Stryker has a watchful eye over the grimy, dirty street of Demacia. As howling metallic turn asphalt into their playground, Garen employs his martial skills and razor-sharp katana to apprehend criminals roaming this beautiful city.

Demacia Vice Garen comes in ruby, sapphire, obsidian, amethyst, Catseye, neon noir, and pearl colors. The cosmetic is rather simplistic, with a very small number of details. Blue and gray are the dominant colors, but you have a few other shades there as well. Overall, I don’t really like the color combination as they feel out of place at times.

Let’s start with the champion’s sword. As with all Garen the skins, he wields an enormous two-hander. Its back edge is straight, while the frontal one is slightly curved. The blade is made from grey metal, with an edge combining black and red.

You can notice a large turquoise rain guard with a yellow edge. The cross guard doesn’t actually exist as the blade transitions straight into an uninspiring brown hilt.

There aren’t many interesting things regarding the character’s clothing. If we exclude pink sunglasses and a golden emblem on his back, the skin doesn’t have many details.

He wears gray loafers without socks and has long gray jeans held by a brown belt with a golden buckle. A brown shirt covers his torso revealing a set of manly chest hair (as is common for 80s cops). Garen wears a light blue jacket with wide shoulders. As previously mentioned, there is a cool, golden emblem on his back, which is probably the best thing about this set. He also wears brown fingerless gloves.

While the outfit is the right embodiment of 80s fashion, it doesn’t feel special. In fact, there are many other skins that I would much rather buy than Demacia Vice Garen. However, it is worth noting that some of the alternate chromas are much better, in particular, neon noir.

The first thing worth mentioning is that the edge of his sword has a nice pink glow. When coupled with sparkly green Perseverance effects, it gives Garen a cool disco vibe. After activating Decisive Strike, there is a pink/purple synthwave effect behind the champion. He creates a pink, electric splash when striking an enemy with this ability.

Courage creates an orange sun effect beneath the champion’s feet, a pink circle around him, while his body starts glowing light blue. Upon activation, you can see 4 shields briefly surrounding Garen, the same emblem used for his jacket.

Judgment looks pretty awesome. As the character spins around, he leaves a pink inner trail and a light blue outer trail. Demacian Justice calls forth an enormous pink sword to strike a target. Upon hitting an enemy, there is a lightning visual at the point of impact, as well as a pink grid beneath the opponent’s feet.

The champion has a few nice emotes. He does pushups on one hand, after which he poses for the camera. During the second emote, Garen does a goofy dance.

When using the Recall spell, a synthwave visual appears under his feet. After throwing his sword into the air and performing a brief dance, he is ported back to base. The champion’s basic strikes leave a pink grid trail in their wake.

Demacia Vice is the best representation of what you get when you mix a man with a machine. Hell-bent on enforcing justice, Detective Lucian Phoenix made a name for himself by striking down the bad guys. His creators used the finest chrome and carbon fibers to create this technologically superior cyborg. Brought back from the grave, his heart still dispenses justice all over Demacia.

The champion has two guys: one short and bulky, and the second long and thin. The bulky gun has nice neon pink lines across it, while the long one has one yellow line. Both of them are futuristic and have curved V-shaped muzzles.

These weapons are pretty dope, and the color combinations work well with other parts of the outfit.

The champion has dark sneakers with orange/yellow laces. The majority of Lucian’s body is made of metal. You can notice this based on his armored legs with gold joints, silver metallic torso with maroon abs, and silver left hand. The only parts of his body that retained human features are the face and the right arm.

Lucian wears a massive pink coat that stretches almost all the way to the ground. Like Garen’s outfit, the champion’s coat has wide shoulders and the Demacia Vice emblem on the back. There are also a few minor embroidered gold details that instill life into the outfit.

The champion wears black fingerless gloves on both of his hands. He has a golden collar around his neck and wide golden sunglasses that look more like a visor but were completely normal for the 80s. He fashions a cool haircut like Mister T.

Instead of utilizing simplistic light blue effects for Piercing Light, the designers used a pink diamond effect. Upon releasing the blast, pink particles appear in its wake. Ardent Blaze relies on similar shapes and colors. Every part of the cross looks like an elongated pink diamond. While marked, the enemy’s body becomes orange with red outlines. Lucian’s movement speed buff is represented with pink particles.

During the first Lucian emote, the champion will blast the ground with his guns, creating a pink circle on it. He adds glasses and a smile to the circle so that it resembles an emoji. When using the second emoji, Lucian starts spinning his weapons around.

During Recall animation, the champion joins the guns together, creating nunchaku. There is a pink sunset in the background, which goes great with the skin theme. His basic hits are pretty incredible; there is a pink/orange straight trail behind his bullets. Upon hitting an enemy, a perfect pink circle appears around them.

Answer: The collection was introduced back on July 18th, 2019, with the release of Demacia Vice Lucian and Demacia Vice Garen. Riot initially intended to create a set of 8 cosmetics, but we’re still waiting for the other 6. While there are some indications that these skins will be released in the near future, Riot’s legal issues made it less of a priority.

Answer: Demacia Vice Garen is a cosmetic with great visual effects. They go well with the overall theme and put the champion in a completely new universe. Unfortunately, there aren’t many emojis or other effects that would make you go “Wow!” At moments, it feels as if the designers did the bare minimum just so they could release the content.

Question: Is Demacia Vice Lucian worth your money?

Answer: Demacia Vice Lucian is a solid skin, in my opinion. The basic outfit is much better than that of Garen, and his effects are equally as impressive. If you like the cop theme, this can be a great purchase for you.

Question: How much do Demacia Vice skins cost?

Answer: Both Demacia Vice Lucian and Demacia Vice Garen cost 1,350 RP. This is a solid price for the quality, and you have to decide whether or not you like them enough to make the purchase.

At this moment, the Demacia Vice collection should be regarded as discontinued. Initially released in 2019, the set features just two skins Demacia Vice Garen and Demacia Vice Lucian. Riot also wanted to add Jayce, Darius, Bard, Vi, Yasuo, and Caitlyn, but we are still waiting for them.

Anyway, this situation is not ideal if you like to collect whole sets. Nevertheless, Demacia Vice Garen and Demacia Vice Lucian could be nice additions to your inventory.