Relic Shield is one of the starter items in League of Legends. Like all other objects from the category, it isn’t particularly potent in terms of the stats, but it does have a few nice passive abilities.

Relic Shield is especially great on supports as it allows them to gain some extra gold and feel good about themselves. That way, you won’t be completely miserable as you’re watching carry farm all those minions without you getting anything.

The item can be upgraded a few times to Targon’s Buckler and eventually to Bulwark of the Mountain.

Relic Shield is an item meant to boost supports’ farm and, with an upgrade, provide additional wards. On top of that, it is nice for some extra sustainability and ability power in the lane.

What Is Relic Shield?

Throughout the patches, this was regarded as one of the more overpowered items. Like anything else that can boost your farm, it was popular among carriers for a period of time to a point where buying Relic Shield on ADC was considered an exploit. However, the item is tailor-made for support as advanced versions would give them access towards.

Relic Shield is an item that costs 400 gold and is classified as a starter item with 2 upgrades. It gives the wearer 5 ability power, 30 health, and 25% base health regeneration. On top of that, you gain 2 gold every 10 seconds.

What’s really interesting about the item are not the stats themselves, but the passives it provides. Spoils of War is the first passive feature of the item. Every 35 seconds, Relic Shield will gain a charge. Whenever you attack a minion who has low health, you will use a charge, killing the unit in the process. Keep in mind that the unit has to be below 50% (melee minion) or 30% (ranged minion) health for the effect trigger.

What’s really important about the Relic Shield is that these kills give both you and your nearby ally gold. However, the loot will be split between the two champions, which is why in lower ELO games, players often get mad at Relic Shield users.

If you make too many units kills, the gold returns will diminish.

The second passive comes as a quest reward. Once you earn 500 gold from killing minions, the item will be upgraded to Targon’s Buckler. When picking Relic Shield, always remember that you’re limited to having 1 support or jungle item.

How Does Relic Shield Help You? 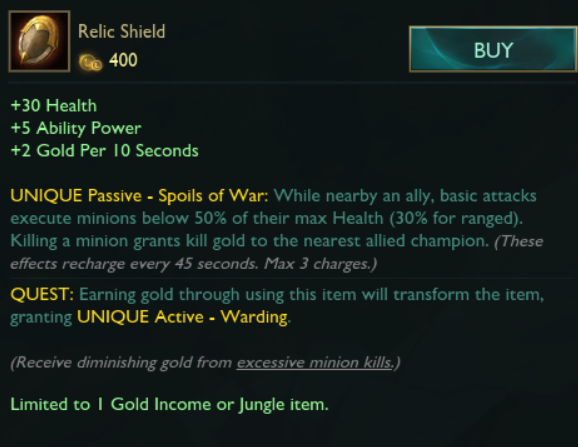 Here are some of the ways the item can help you:

Although often regarded as a laning item, Relic Shield can provide benefits deep into the mid-game. Once you upgrade it, the item will provide additional perks. As a support, you will carry it around for a long time, so there is no loss of value.

Targon’s Buckler is the first upgrade to Relic Shield. It slightly boosts the stats by giving you 10 ability power, 10 health, and 50% base health regeneration. Instead of 2 gold per 10 seconds, it gives 3 gold per 10 seconds. The minion killing passive is almost the same. The only difference is that the ranged minions are easier to take down. Instead of a 30% health threshold, you can now kill ranged units when they’re below 50% health.

Warding unique allows you to consume Relic Shield charge to put a Stealth Ward at a specific spot. You can now require the charges when you visit the shop. Once you gain 500 gold through minion killing, the item will be upgraded to Bulwark of the Mountain.

The third level gives you 20 ability power, 250 health, and +100% base health regeneration. Now, you have a limit of 4 charges instead of 3 for placing wards.

The Most Common Relic Shield Users 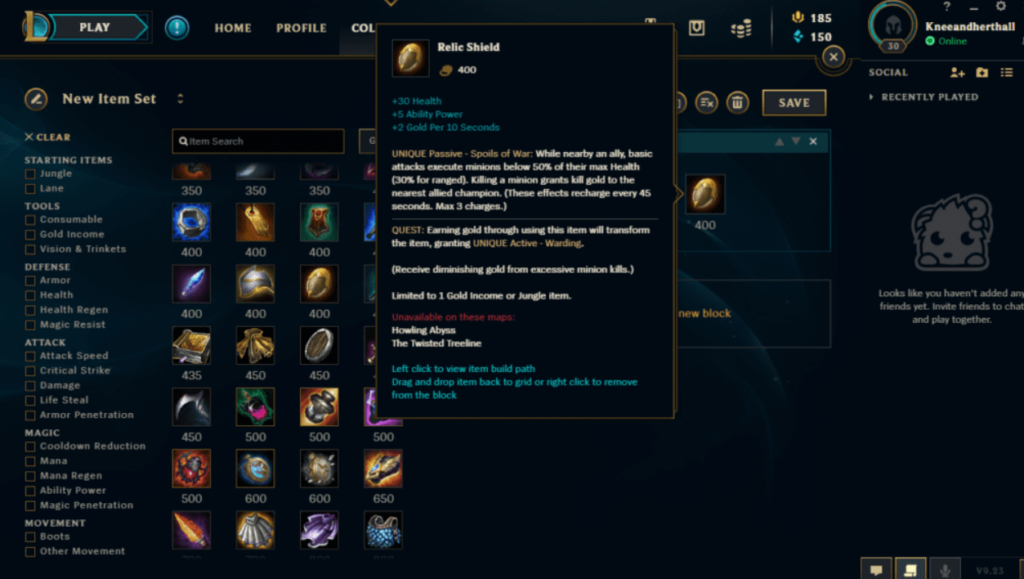 As mentioned, this is an ideal item for supports on the bottom lane. You can make it on champions such as Soraka, Alistar, Blitzcrank, Maokai, Nautilus, Leona, etc. In terms of pick frequency, it is most common among supports. In fact, on 100 purchases, it will be bought by support champions 94 times. Depending on the situation in the lane, ADC characters can also benefit from it.

Here are some of the most interesting things about the item:

Question: When should I use Relic Shield?

Answer: Relic Shield is a great way to control lanes, protect yourself from ganks, and manage minion equilibrium. When in tough lane, it can provide the carry some extra gold. Of course, the execute ability also works for the carrier.

Question: How does Relic Shield work?

Answer: With this item, you are able to execute units that are below 50% (melee minions) or 30% (ranged minion) health. The feature activates on your auto-attacks.

Answer: Back in the day, Relic Shield would heal both you and your lane partner upon minion execution. However, this feature was removed with patches.