Moonstone Renewer is a very powerful mythical item. Although designed for supports, you can argue that the item can work on anyone. For example, it can be great if you have several tanks on your team and want to increase the overall sustain of allies.

The item provides sizable AP increase, mana regeneration, health, and ability haste. So, it has both offensive, defensive, and support capabilities. However, the thing that separates it from other items is its unique passive Starlight Grace, which can be boosted by having legendary items in your inventory.

In this Moonstone Renewer guide, we will take a look at the time, optimal users, and how it can help your team.

Moonstone Renewer is a powerful healing item that gets better the longer you remain in battle. It is especially great on champions who have low cooldowns and can spam their abilities over the course of a team fight.

Basically, this item gives support everything it needs. You receive 200 health, 100% base mana regeneration, 40 ability power, and 20 ability haste. If you’re a support, you can stay in the back, not having to worry about health, while having enough mana to continuously spam spells. Furthermore, these spells will be stronger, and you can cast them faster.

For a mythic item, Moonstone Renewer is very cheap. It costs a total of 2,500 gold, and you build it by acquiring Bandleglass Mirror for 950 gold (435 for Amplifying Tome, 250 for Faerie Charm, and 265 for recipe), Kindlegem for 800 gold (400 for Ruby Crystal and 400 for Kindlegem recipe), and Moonstone Renewer recipe for 750 gold.

While all these stats look awesome, the main reason why this item is so powerful is because of its unique passive Starlit Grace. This is a strong healing spell that activates whenever you attack enemies or use abilities on champions. It is worth noting that this interaction applies to both allies and enemies. In other words, if you cast a heal or shield on an ally, Starlit Grace will be used.

Whenever it procs, the unique will heal a nearby ally with least health for 70 health. This effect can activate every 2 seconds. For every second you remain in battle, your heals and shields will increase in power by 7%, stacking 5 times up to 35%. In other words, your defensive spell will improve by one-third after 5 seconds in battle.

If that wasn’t enough, every legendary item in your possession would increase Starlit Grace heal by 10. So, you can potentially heal allies for 120 health, which will be further increased after 5 seconds of combat by 35% for a total of 160 health.

Just one year ago, this item was so strong that you would see it on various characters. Riot has changed it a bit, so it is more specialized. Nowadays, it works a bit better on supports, but it still has some merit on other champions.

The Most Common Moonstone Renewer Users

Moonstone Renewer can fit well on anyone who relies on mana and AP. However, as it gives up to 35% increased healing and shielding, it is a much better fit for supports. Most commonly, you will see it on Ivern, Lulu, Seraphine, Sona, Soraka, Yuumi, and Vex.

There is additional data that corroborates this. In 91.4% of cases, the item is bought by a support. In 5% of cases, it is purchased by junglers, while other roles make for 3.6% of all other acquisitions.

One of the underrated things about the item is that it focuses on champions with the least health. In other words, if you’re trying to save an ally with a shield or a heal, Moonstone Renewer will provide that additional boost that might help them survive the fight.

The Most Popular Builds That Include Moonstone Renewer

Generally speaking, supports are a bit more dependent on ability haste than ability power. This is because they need to alternate between allies, healing and shielding those who are being targeted. So, let’s say that after saving one teammate, they need to proceed in saving the next one. Their role is highly reactionary, which is why every second less on cooldowns can make a difference.

However, that doesn’t mean that ability power is irrelevant. When you heal an ally, you want to give them enough time so they can escape.

Here are some of the more popular support builds that require Moonstone Renewer:

Most of these builds are very similar. Aside from Ivern, all these champions should buy Ionian Boots of Lucidity. The item provides a nice ability and summoner spell haste. Shard of True Ice is a classic support item that gives you 3 extra gold every 10 seconds, 40 ability power, 75 health, and 100% mana regeneration. Most importantly, with this item, you will gain access to Warding unique.

Moonstone Renewer is especially popular with Staff of Flowing Water. Given that this staff is categorized as legendary, it will increase the Starlit Grace heal by 10. What’s even more important is the buff that the item provides.

Staff of Flowing Water has a unique passive called Rapids. Whenever you heal or shield an ally, it would grant both you and the ally 20 ability haste and 25 – 45 AP. Not only does the ability power and ability haste stack well with Moonstone Renewer’s base stats, but the shorter cooldown time on ally could help them use their own escape abilities and defensive spells, allowing a safe retreat.

Ardent Censer is another nice pickup. It gives you an enormous boost to ability power (+60 AP), 100% base mana regeneration increase, and 10% improvement to shields and heals. Whenever you shield or heal an ally, you will activate Sanctify unique passive that provides both of you increased magic and physical damage. 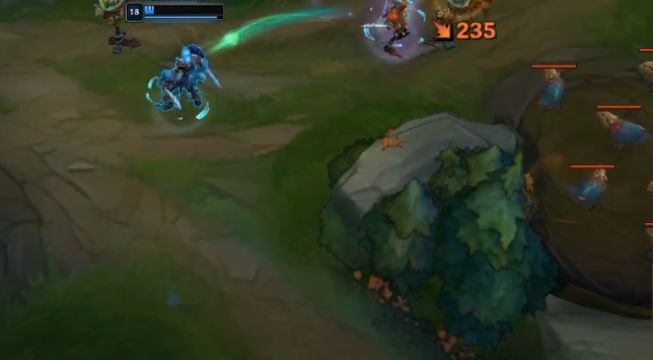 Moonstone Renewer is a relatively new item. In this short amount of time, it has gained enormous notoriety. So much so that it was constantly used in pro games, even on non-support champions. Here are some peculiarities about Moonstone Renewer:

Question: Does Moonstone Renewer heal you?

Answer: The item always targets a nearby ally with the least health. Unfortunately, if you’re in danger, it won’t heal you. This was done so that enemies could still target the healer, thus preventing exploits.

Question: How does Moonstone Renewer work?

Answer: Whenever you cast an ability on an ally or an enemy, or whenever you attack an enemy, you will heal an ally with the highest percentage of missing health. This effect can take place every 2 seconds. As long as you’re in combat, you will gain a 7% boost to your shielding and healing. The boost increases every second up to 35% after 5 seconds.

Answer: Moonstone Renewer can be good on several AP champions that use mana. However, it is optimal for enchanters. As long as you have abilities with short cooldowns, lots of heals and shields, you will benefit from the item.

Moonstone Renewer is a pretty cool item if you’re a support player, and it will make you feel much more useful in teamfights. The item is so strong that it will sometimes help you turn the tide of a battle by yourself.

Starlit Grace is an interesting, unique passive that scales well with other healing and shielding effects. Even if you mess up in fights, it can cover for your mistakes by healing the most endangered ally. Although you can have fun buying the item on some non-support champions, I suggest that only buy it on characters with heals and shields.