Runaan’s Hurricane is a League of Legends item that can be found on Summoner’s Rift, Wild Rift, and Teamfight Tactics. This particular item can only be utilized on ranged champions, and it provides several interesting boons to your offense.

Runann’s Hurricane has an interesting passive called Wind’s Fury. The unique effect will fire two additional bolts at enemies, and each one of them can benefit from procs, critical strikes, and other effects. Among others, this offensive weapon will increase your presence in teamfights.

In this Runnan’s Hurricane guide, I will review the item and explain how to utilize it properly.

Runaan’s Hurricane is a potent offensive item that can only be wielded by ranged champions. It provides nice stats, and it is especially great for dealing damage in an area. 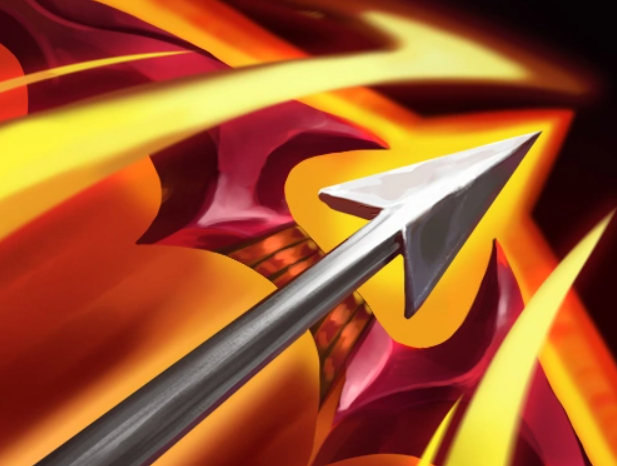 If we’re talking about the potency of its basic stats, Runaan’s Hurricane provides a 95.58% efficiency. However, to better understand its power, you need to calculate Wind’s Fury unique passive, which can be really hard to do given all the variables.

In other words, to get the most out of the weapon, you need a really good positioning in teamfights so that bolts hit as many enemies as possible. Runaan’s Hurricane shares some traits with Guinsoo’s Rageblade, Rapid Firecannon, Phantom Dancer, Infinity Edge, and Mortal Reminder. It has a lot of interesting features, which can be quite confusing for new players.

Whenever you attack someone, you will fire bolts at up to 2 enemies in front of the character. Each bolt will do physical damage equal to 40% attack damage. They will also apply critical strike and all other on-hit procs at their maximum efficiency.

Keep in mind that these bolts can be blocked. Each one of them travels at a speed of 2,000, and they can’t target wards or structures. It is also worth noting that the item’s movement speed stacks with other sources of movement speed.

How Do Bolts Work? 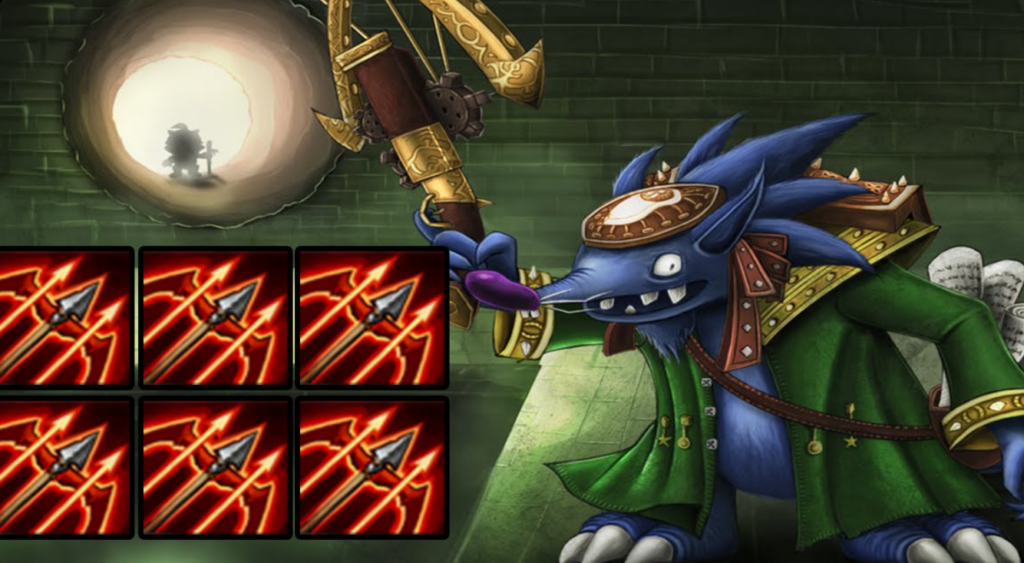 Runaan’s Hurricane has a lot of interesting interactions. For example, if you purchase the item on a shapeshifting character, you will still be able to use it, but only when the champion is in its range form.

Each bolt is considered as a basic attack for the purpose of other effects. In other words, they are affected by things such as lifesteal, critical strike chance, attack speed, blind, parry, block, etc. The critical strike component is only applied if the initial strike also does critical damage. However, the bolts cannot be affected by guaranteed critical effects.

Furthermore, if you hit an enemy with a bolt, you will get feedback from the opponent’s item effects, such as Thornmail. The bolts do not trigger aggro from the minions and are regarded as AOE strikes for the purposes of vamp healing (in other words, you only get 33.3% restoration)

Keep in mind that these are general rules, and there are a few exceptions to them.

How to Maximize Runaan’s Hurricane’s Potential?

The item has several main purposes. Besides increasing champion’s effectiveness in teamfights, it should help you survive for a longer time due to bolts lifesteal interaction. It can also be great when used with various on-hit effects, as each bolt can proc. For example, it is especially great on someone like Varus or Kog’Maw as it allows them to maximize their ability kit.

Some of the popular users are Twitch and Aphelios. Twitch’s Pray and Pray and Deadly Venom synergize nicely with this item. The same can be said for Aphelios, in which case, you can benefit from Gravitum’s slow, Infernum’s splash, Calibrum’s bonus range, etc. Runaan’s Hurricane is also incredible for Jinx as it allows stacking of Pow-Pow with each bolt that lands on an enemy.

While tailor-made for ranged champions, and it excels for splash damage and criting, it will not be suitable for every crit-based character. Good examples of this are Draven and Vayne, who don’t synergize well, or Jhin, who relies on abilities to be effective instead of relying on basic attacks. 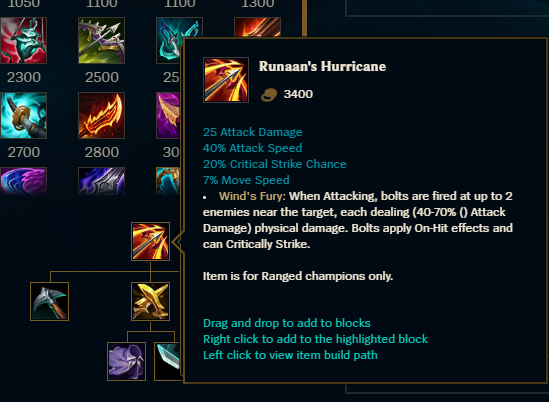 The weapon was introduced in version 1.0.0.152, alongside numerous other items. The first formula required two Daggers, Recurve Bow, and a recipe for a total cost of 2,750 gold. It gave the wielder 70% attack speed. Since the get-go, Runaan’s Hurricane would cast bolts upon basic attacks. It would create two bolts that dealt 10 plus 50% AD to enemy units and would apply on-hit procs and effects.

For a while, Riot didn’t do anything special with the item. They made a few bug fixes and would change the item price several times over from 2,750 gold to 2,450, then to 2,400, and ultimately, to 2,500 gold in patch 5.8 when they also added a passive effect providing 10 bonus damage on-hit.

It also had two passives. The first one would give you 15 physical damage on-hit, and the second was the newly-introduced Wind’ Fury. The first iteration of Wind’ Fury created up to two bolts, with each one of them dishing physical damage equal to 25% AD. The bolts could still crit and utilize other on-hit effects.

After that, Riot slightly increased movement speed to 7% and increased the price to 2,600. They also changed how the bolts interact with the environment. The next bigger change occurred in version 7.9, when the recipe was altered a bit. Instead of Recurve Bow, the item once again required two Daggers.

Given that Recurve Bow was removed, Ruanaan’s Hurricane no longer had the passive granting 15 on-hit physical damage. However, the developers compensated by increasing bolts’ damage ratio from 25% to 40%. 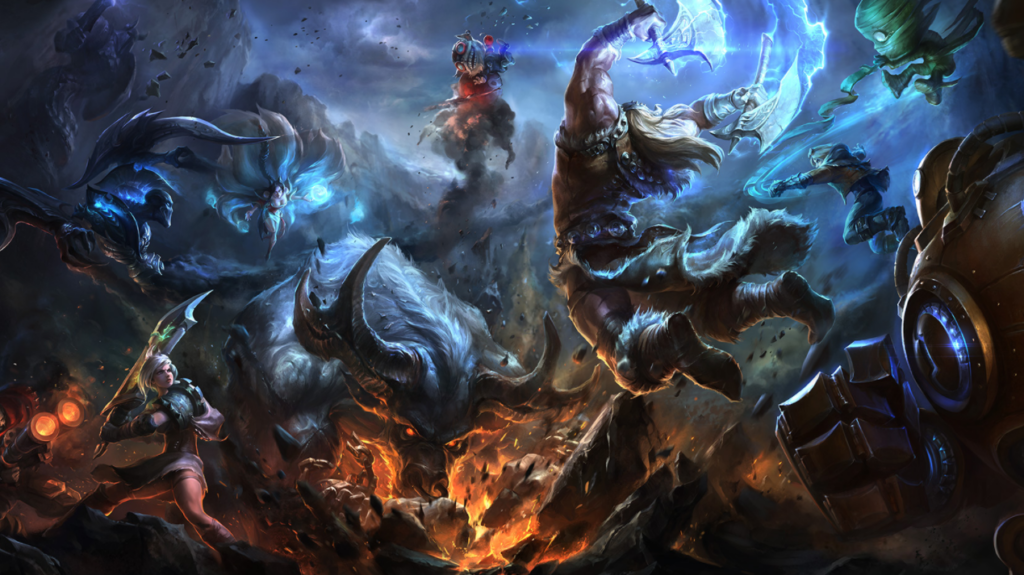 Version 10.23 brought numerous changes to all items. Like other legendries, Runaan’s Hurricane received an updated icon, and you could no longer have more than one in your inventory. It still had the same limitation of being a ranged champion-exclusive item.

Not many notable things occurred after that. For the most part, Riot was just eliminating minor bugs surrounding the weapon and performed a few tweaks to price and stats. The biggest change occurred in the 11.1 version when the recipe no longer required Pickaxe, but instead, you would need to buy a second Dagger. The price went down to 2,500 from 3,400, the item no longer gave extra attack damage, and bolt damage was reverted to static 40% attack damage.

The latest update to the item occurred in version 12.3 when Riot dealt with a smaller Ezreal bug.

The Most Common Runaan’s Hurricane Users

Due to the fact this item can only be utilized on ranged auto-attackers, it has very limited usefulness. Overall, it is viable on 11 different champions, including Aphelios, Ashe, Jinx, Kalista, Kai’Sa, Kindred, Kog’Maw, Twitch, Varus, Zeri, and Neeko.

It has a positive win rate, but it is far from being an amazing item. The weapon provides 55.59% odds of winning a match when you have it in inventory. However, it has a very high pick rate of 22.51% on these 11 champions.

Due to the fact that bolts scale with on-hit effects and other procs, it doesn’t make sense to buy the weapon as the first choice. In fact, Runaan’s Hurricane provides the best results the later you buy it. For example, it is bought as the second item in 73.97% of cases but would only provide a 54.41-win rate in these situations.

On the other hand, if you buy it as the fourth item, which happens in 4.18% of all games, you will have a win chance of 59.25%. Runaan’s Hurricane is almost never bought as the first or the last item. 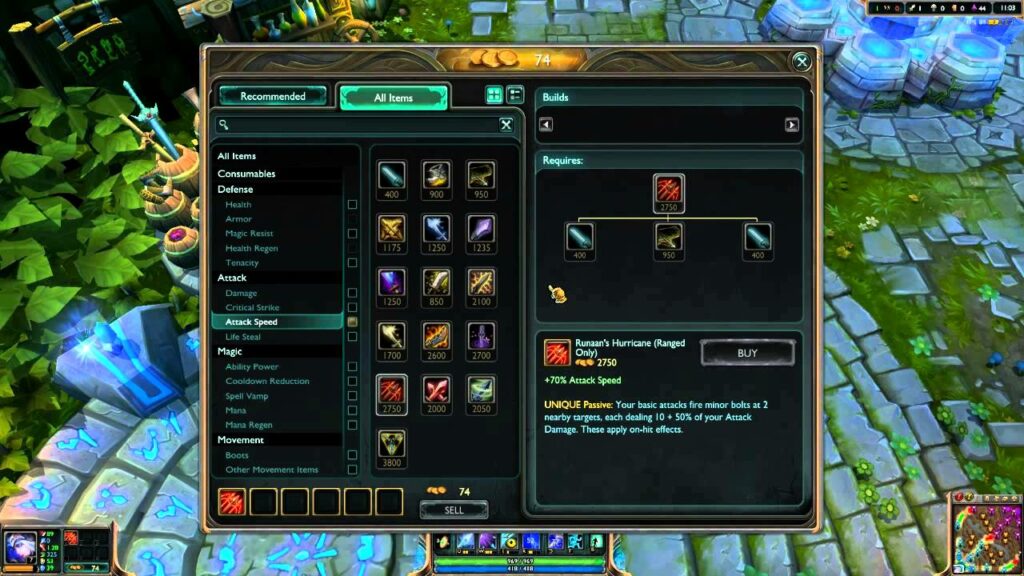 This isn’t the most flexible item when talking about potential users and item builds. It is almost predefined which characters can benefit from the weapon and when you should buy it. For example, this item is always bought with Berserker’s Greaves and is commonly paired with Guinsoo’s Rageblade, Kraken Slayer, or Infinity Edge.

Here are some of the more popular builds and items that go with Runaan’s Hurricane:

Berserker’s Greaves are basically the only boots you should build with Runaan’s Hurricane. They provide an attack speed boost that works well for this item, but also your basic attacks.

Guinsoo’s Rageblade is pretty awesome with this weapon. The item gives you 45% attack speed, 20% critical chance, and a passive called Wrath that converts your crit chance into extra attack damage. Guinsoo’s Rageblade’s other unique passive is called Seething Strike, which creates a damaging on-hit effect, which is great for bolts.

Kraken Slayer is a mythic that provides 65 attack damage, 20% critical, and 25% attack speed increase. Its mythic passive will increase your attack speed by 10% with the addition of every legendary. Bring it Down is a passive unique that deals extra true damage (activates at two stacks granted by basic attacks).

Lastly, we need to mention the synergy with Infinity Edge. The item provides 20% critical, 70 attack damage, and a passive called Perfection that increases your critical strike damage by 35% when you have at least 60% crit chance. This works really well for bolts, allowing you to decimate enemy lines.

Like most LoL items, Runaan’s Hurricane has a fun origin story:

Question: What does Runaan’s Hurricane do?

Answer: Runaan’s Hurricane is an item that provides an extra 7% movement speed, 45% attack speed, and 20% critical strike. However, it is commonly bought for its Wind’s Fury effect. This unique passive will launch two bolts on opponents with every basic attack. These bolts benefit from critical strike and all other on-hit effects, making them really potent against enemy champions and other units.

Answer: With Runaan’s Hurricane, the Riot team pays homage to one of its team members Devon “Runaan” Giehl, who was, at the time of item creation, an associate creative designer within the company.

Answer: Although not very flexible in terms of potential build options, Runaan’s Hurricane can be very fun. Bolts from the Wind’s Fury passive benefit from all on-hit effects, including critical strikes and other procs, which makes it interesting to wield the weapon on different champions.

Answer: Unfortunately, Runaan’s Hurricane does not work on melee champions. It can only be utilized on ranged characters, and it makes sense to buy it on 11 champions.

Runaan’s Hurricane is not an item you see all that often. It is great on a handful of champions, but due to its limitations, most characters can’t even equip it. However, the item is really good for wave clearance, and depending on enemies’ positioning, it can dish a lot of damage in teamfights.

The weapon is especially potent if you have other on-hit effects and a high critical chance. Wind’s Fury bolts benefit from just about anything, allowing you to scale AEO damage into the late game.