Phantom Dancer is an item tailor-made for aggressive auto-attacking carries. It is classified as a legendary item and, besides Summoner’s Rift, you can also find it Wild Rift and Teamfight Tactics. Phantom Dancer has some similarities with Essence Reaver, Infinity Edge, Runaan’s Hurricane, Stormrazor, and Rapid Firecannon.

The item is especially great for champions who lack mobility. It provides several buffs to your character adding to the offensive potential. Besides movement speed, you will also get damage, critical strike, and attack speed. According to developers, Phantom Dancer is an homage to Dota’s hero Phantom Lancer.

In this Phantom Dancer guide, we will analyze the item, its potential uses, and its history of changes. 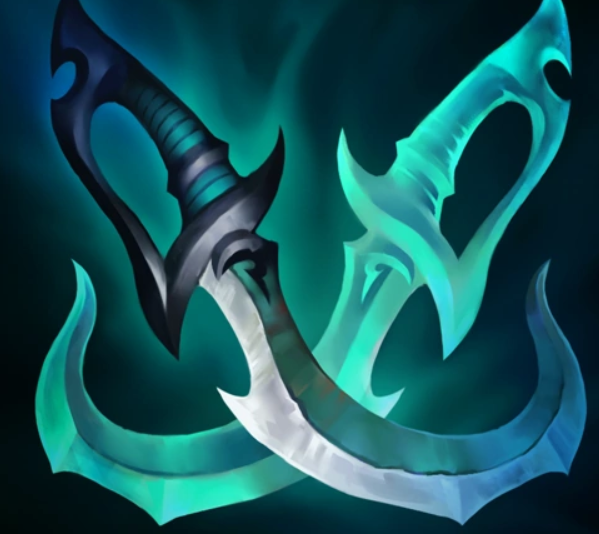 Phantom Dancer is a legendary item that provides several offensive stats. It is amazing on any ADC who is heavily reliant on auto-attacking.

What’s really great about this item is that it has a very high gold efficiency. After attacking an enemy, it provides 124.81% gold efficiency, which further increases to 153%. Although it doesn’t have any specific effect per se, nor does it leave a debuff, the overall stat gain makes it a very good purchase.

Phantom Dancer provides 20 damage, 25% attack speed, 7% movement speed, and 20% critical strike chance to its wearer. You are limited to having just one Phantom Dancer in the inventory. Besides all these great stats, it also has a unique passive called Spectral Waltz.

The passive works when you attack any enemy. Upon the first hit, you will receive a 7% bonus movement speed and ghosting effect. So, by striking nearby targets, you can improve your initiation and escape ability. After striking an opponent, you will get a stack of Spectral Waltz that lasts for 3 seconds. The effect can stack up to 4 times, and when you reach max stacks, you will get an additional 30% bonus attack speed. 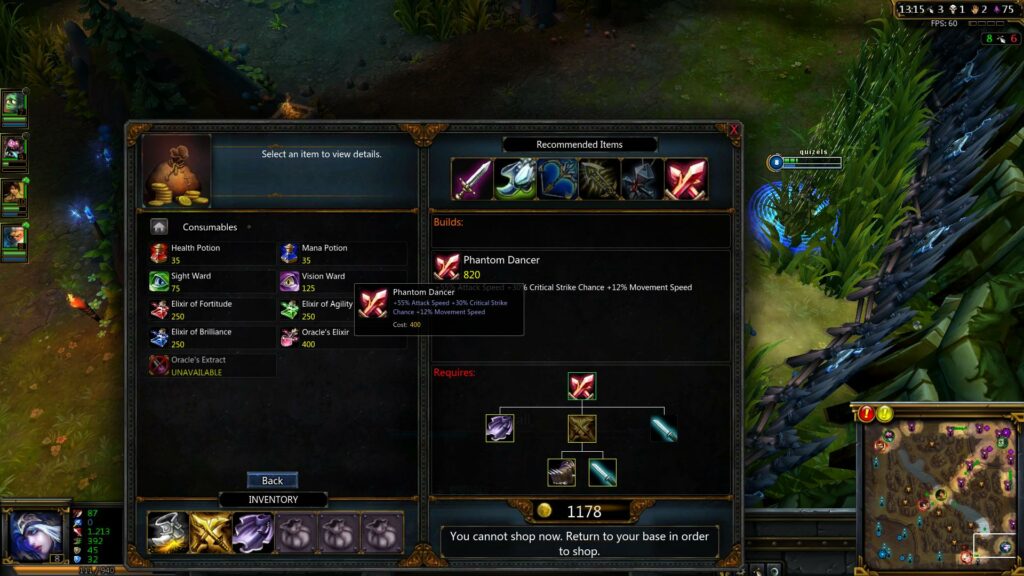 Phantom Dancer is one of the oldest items in the game. It has been present since the earliest beta version. In many ways, Phantom Dancer is similar to Dota’s Sange and Yasha. Both of these magical objects are meant for carries as a way of increasing their damage and mobility.

During the first few patches in 2009, the developers polished the item by introducing a tooltip and slightly adjusting its stats. The first bigger change came with the 1.0.0.107 version when Riot decided to remove 20% dodge, which was one of the initial stats on the item.

Slight changes continued in the upcoming patches. The item received a major update in the 1.1.0.152 version. Phantom Dancer’s cost was reduced from 2,845 to 2,800, its attack speed went from 55% to 50%, and movement speed was reduced from 12% to 5%. Although this was a major nerf, the developers tried to remedy the situation by adding ghosting.

For a while, the team decided to leave Phantom Dancer alone. Another major alteration came with patch 5.22. The recipe was changed, and it now consisted of 2 Daggers and Zeal for a total cost of 2,700 gold. Besides reducing attack speed from 50% to 40%, and critical strike from 35% to 30%, Riot made a major move by completely eliminating the movement speed bonus.

They somewhat made it up by adding two passives in Spectral Waltz and Lament. The first iteration of Spectral Waltz provided a 12% movement speed buff while in the vicinity of an enemy champion. Furthermore, this buff also provided ghosting. Lament would reduce the incoming damage by 12% from the last champion you’ve hit. The effect persisted for 10 seconds. This made it a great tool for 1-on-1 encounters. 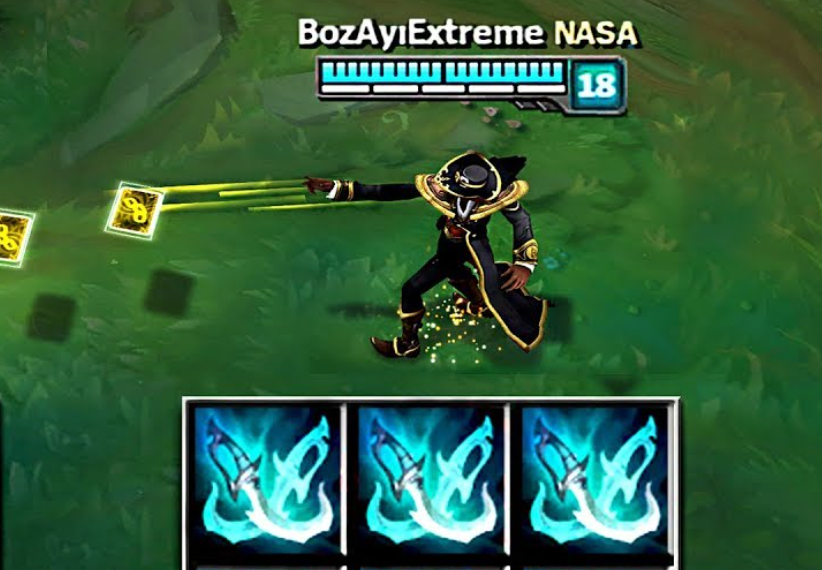 In 6.1, Riot decided to reduce Spectral Waltz movement speed buff from 12% to 7%, and they’ve added a permanent movement speed increase of 5%. The 6.3 version added an interesting tooltip for Lament. You could now see how many times Lament buff saved your life in a fight.

After this, developers haven’t made any changes to the item for a while. From version 7.14 to patch 8.17, they fixed a few Phantom Dancer bugs and changed its pricing. For example, they fixed the ghosting effect and resolved bugs that would prevent activation of Spectral Waltz.

Phantom Dancer received a lot of changes in version 9.3. First off, instead of requiring two Daggers, Zeal, and the recipe, you now made it by assembling Dagger, Zeal, Brawler’s Gloves, and the recipe. Its cost also went down by 100 gold.

In this patch, the Phantom Dancer’s attack speed and critical strike were slightly reduced. Instead of activating while in the vicinity of an enemy, Spectral Waltz would now activate once you attack a champion. It would still provide a 7% movement speed buff and ghosting, but it would only last for 2 seconds.

Lament was completely removed, and instead, it was replaced by Lifeline. This new unique would create a shield whenever your maximum health goes below 30%. This shield could absorb from 240 to 600 damage, but it only lasted 2 seconds. Furthermore, the passive has a 90-second cooldown. Unlike Lament, which was meant to reduce continued damage, Lifeline was good against nuke damage and focused attack.

The 10.23 version updated all the items, including changes to classification. First off, the developers changed the Phantom Dancer formula, and instead of Zeal, Dagger, and recipe, it now required two Daggers, Zeal and recipe. Its price went from 2,600 to 2,900.

Version 10.24 saw a small yet major buff. The Spectral Waltz effect now lasted 3 seconds instead of 2, making it much more viable in fights.

The last significant update to Phantom Dancer occurred in patch 11.3. You now required 2 Long Swords, Zeal, and a recipe to assemble the item. For the first time, the item received an attack damage buff of 20. Its attack speed when from 45% to 25%, and the required stacks for Spectral Waltz attack speed boost went from 5 to 4. At the same time, this effect would provide 30% attack speed instead of 40%. 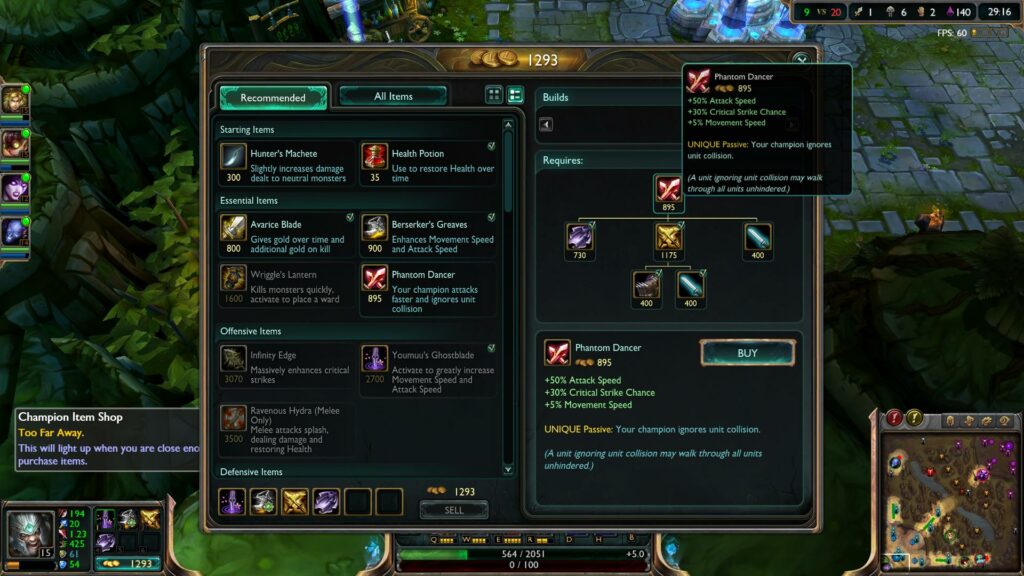 Phantom Dancer can be used on any champion who relies on basic attacks. It is especially great for one-on-one dueling. You can often see it on characters such as Graves and Vayne, but the list of potential users goes on and on.

The item is even better on champions who can quickly get to 4 stacks. In other words, all the characters who can perform several basic attacks in quick succession. The sooner you get Spectral Waltz, the more efficient you will be in teamfights and skirmishes.

Phantom Dancer is really good if you’re ahead. It will make your character much harder to take down due to the movement speed buff. Among others, the item is great for champions like Tryndamere, who can easily be kitted yet, benefit from critical strike chance.

In terms of potential pairing with other items, using Guardian Angel and Phantom Dancer together can give you a 62.8% win chance. The combination of Guinsoo’s Rageblade and Phantom Dancer has a 62.7% win rate, and when coupled with Wit’s End, you have 62.3% odds of winning a game. If you don’t need range, Phantom Dancer can be a good replacement for Rapid Firecannon.

The most popular builds that include Phantom Dancer 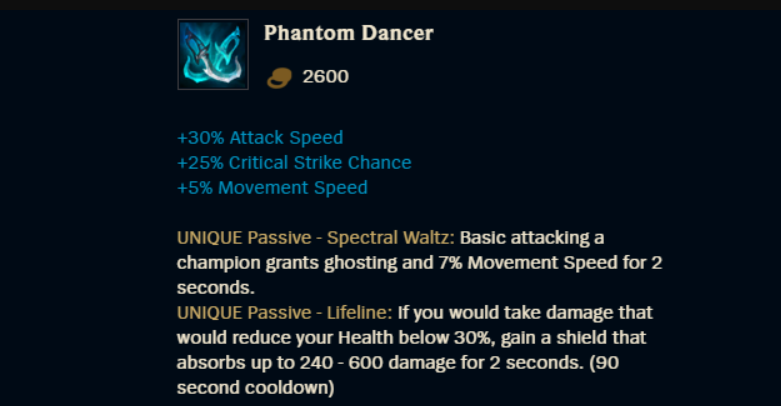 Phantom Dancer is a very flexible pickup that goes nicely with other offensive items. It gives ADCs everything they need, including attack and movement speed, damage, and critical strike chance. All in all, it can have a major impact on your mobility, allowing you to chase enemies and run from the pursuers.

Here are some of the most common builds and champions who benefit from the item:

Although items such as Guinsoo’s Rageblade and Guardian Angel provide the highest win rate when coupled with Phantom Dancer, they are not a part of the most popular builds. Instead, the most common combination is Phantom Dancer and Infinity Edge.

Basically, Infinity Edge will provide a boost to your total attack damage and will further increase the damage from critical strikes. As such, it is a perfect addition to any critical strike item.

Most of these builds include Berserker’s Greaves. These are standard boots for carries that add significant attack speed to the users. Among others, they work well for Spectral Waltz as they help you get to 4 stacks much quicker.

After these two items, there are lots of variations to the builds. Runaan’s Hurricane is often bought with Phantom Dancer. This item has very similar base stats providing users with movement speed, critical strike chance, and attack speed.

Question: What is Phantom Dancer used for?

Answer: Phantom Dancer is a legendary item that is great for most attack damage carries. It provides damage, attack speed, movement speed, critical strike, and a unique passive called Spectral Waltz. The item shines for all champions who rely on critical strikes but also those who lack mobility.

Answer: Phantom Dancer’s unique passive Spectral Waltz is predicated on stacking attacks. As soon as you hit an enemy, you will gain a 7% movement speed increase and ghosting. Once you reach 4 stacks, you will gain a 30% attack speed boost that lasts 3 seconds.

Question: Who are the best Phantom Dancer users?

Answer: Phantom Dancer can be utilized on almost any AD character. It gives you everything you need on offense, including mobility and critical strike. It is great on Corki, Yone, Vayne, Tryndamere, Yasuo, etc.

Question: What are the best items to use with Phantom Dancer?

Answer: There are lots of different Phantom Dancer builds you can consider. The great thing about this legendary is that you can combine it with just about anything. Among others, it goes really well with Infinity Edge, Kraken Slayer, and Guinsoo’s Rageblade.

Phantom Dancer is a great item that you can build at any time. However, it is usually better to purchase it as the first or second item (after boots). It will give your ADC everything they need on offense, from movement and attack speed to critical strike and damage. Spectral Waltz will further increase your offensive capability, rewarding champions who stick with one target.

Champions such as Aphelios, Corki, Sivir, Yone, and Vayne can really benefit from the purchase. The item goes well with Infinity Edge, Berserker’s Greaves, and Runaan’s Hurricane, but you can experiment with it and try to find new, unique combinations.